The GW Geckos hand the ND Royals their first loss of the season. 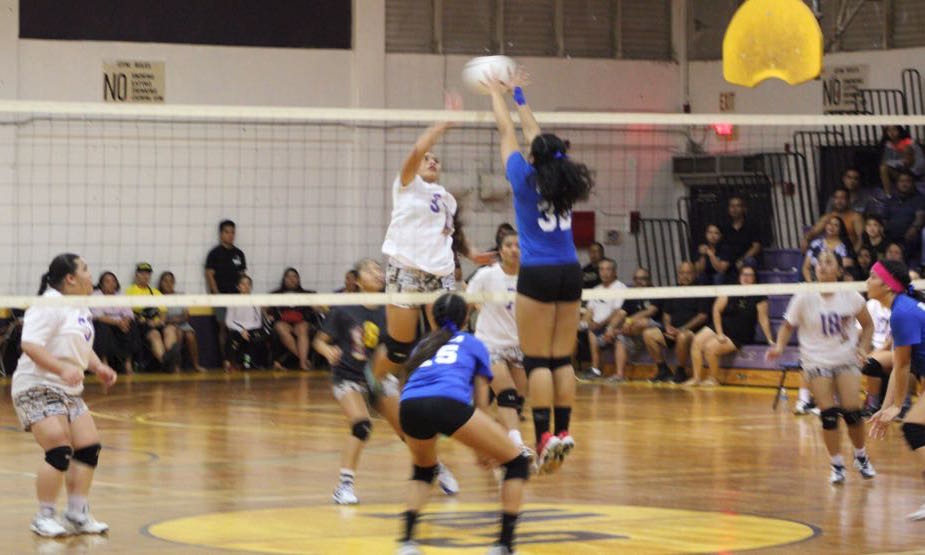 And then there were none.

The Notre Dame Royals were riding a 13-0 perfect record in the IIAAG Girls Volleyball League before they stepped on to Queen Bobbi Quinata’s court Tuesday night.

The Mighty Geckos hung on to win a gut-wrenching 25-13, 21-25, 26-24 win, handing the Royals their first loss of the season and still proving that the historically successful girls volleyball program at GW is still a force to be reckoned with.

“I told my team that I can take them to the top, they just have to do the work,” said coach Quinata, the winningest coach in Guam girls volleyball history.

“We started off our season with three early losses so this really means a lot to us,” said junior middle blocker Evita Laguana, who was the Wendy’s Player of the Game with seven kills and five blocks. “It feels really good. We practiced really hard especially for this game.”

“That’s volleyball man,” said ND interim head coach Art Stanley. “That’s two good teams that do what they do in their own respective way and the better team won today. (The Geckos) did what they do. They play tough and hard nosed volleyball and you can’t hope to win against them. You got to go get it.”

After rolling to a 13-0 record, the Royals played flat in the first set, dropping their worst set of the season at 25-13. Their high-powered offense started to show signs of life midway through the second set, giving them breath and a 25-21 set win.

The deciding set was like a heavyweight fight as both sides threw big blows. ND actually had game point at 24-23 before the Geckos somehow pulled out an improbable comeback, taking the last three points and ending the night on a Royals unforced error.

“Our goal is not to go undefeated,” Stanley added. “We get no extra points (for being undefeated) going into the playoffs. It’s to win first place in our pool. Although it hurts and stings, we don’t hang our hats on the regular season. It’s a reminder that our girls need to work a little bit harder and finish games.”

After a feeling out process early in the first set, GW’s Laguana and senior outside hitter Callia Concepcion controlled the net that allowed the Geckos to get out to a comfortable 16-9 lead. ND couldn’t recover from the hole as the two GW stars combined for seven kills in the opener. It didn’t help that the Royals passing was not on their usual crisp game, resulting in 10 unforced errors.

It looked like it was going to be a clean sweep for the Geckos as they raced out to an 8-1 lead in the second set. It was Laguana, again, coming up big at the net, making her presence felt with a couple of huge blocks on league MVP candidate Carlie Quinata.

ND finally found its formidable game midset and slowly chipped away at the lead. DavieRae LeFever sparked the offense with back-to-back aces while junior sensations Quinata and Brianne Leon Guerrero started to get their stroke going from the outside. Leon Guerrero’s fourth kill of the set actually gave the Royals their first lead at 18-17. Quinata did the rest down the stretch, clinching the set with a kill down the line at 25-21.

The final set saw ten ties with the largest lead coming at 19-15 for GW on a Concepcion kill through a double team wall. Leon Guerrero did all she could to keep the Royals in play with seven kills and three aces. Her last ace gave ND game point at 24-23, but the Royals errors was the difference. A total of 13 errors did them in.