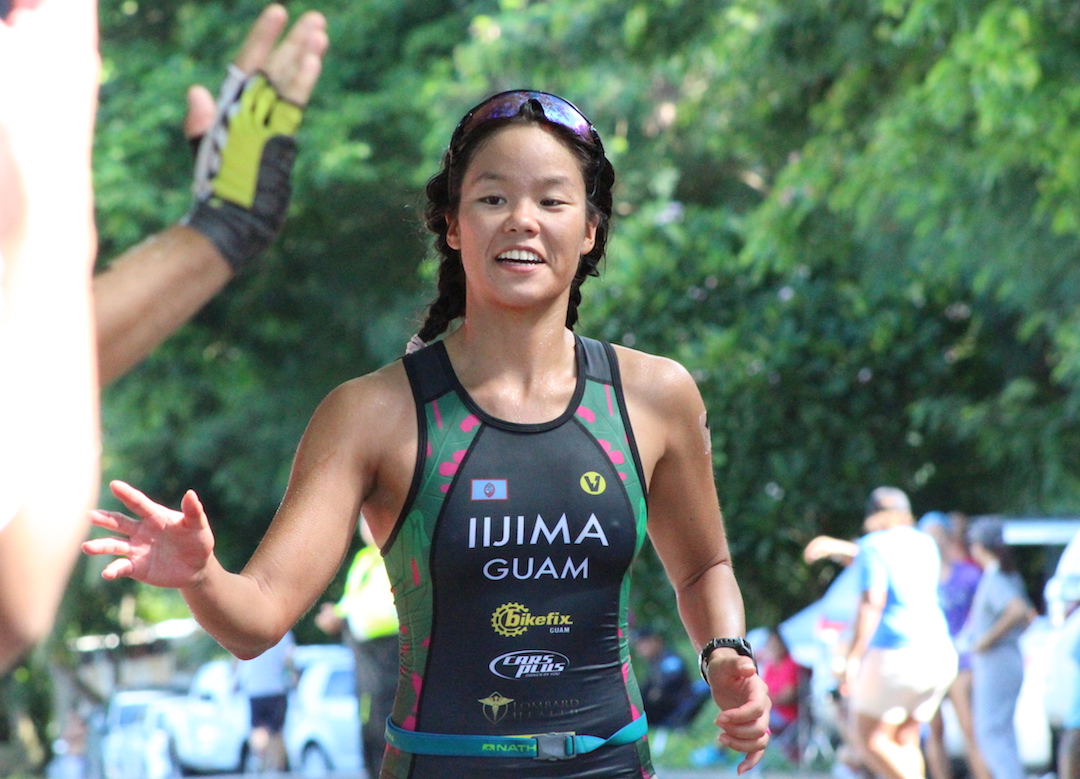 The overall winner for the 2017 Guam National Triathlon Championships was a more than familiar face as Guam’s star athlete Manami Iijima crossed the finish line at 2:18:01. Iijima was the first solo-competitor out of the water during her 1.5km swim, first to finish her 40km bike ride, and first to wrap up her 10km run with only two relay teams ahead of her.

“I wasn’t having the best day, but I just told myself to do my best and this is what I have to give. The water was fun, even though I don’t usually enjoy the swim, I’d say that was the best part,” said the swimmer turned triathlete Manami.

Iijima was surprised at the turn point of her 10k with the competitors tasked to run an extra 100m up ‘Jesus Hill’ which, after the 1.5km swim and 40km bike ride, would feel like torture. But competing on Guam has its benefits for the traveling triathlete star.

“It’s always fun competing here because everyone knows me and I know everyone so people always cheer each other on. It was great to have my training partner Laura [Nadeau] out there pushing me as well,” said Manami.

Following Iijima was training partner Nadeau at 2:20:04 to secure the 2nd overall finisher spot as they hope to replicate their success in Chattanooga later this September in Tennessee’s Annual 2017 Ironman event.

The first male finisher Shin Miyagi coming in at 2:23:01. The veteran competitor Miyagi did face a tough obstacle during his run that slowed him down.

“The run was brutal. I started to cramp after the first lap and I just knew I wasn’t going to finish strong. I did a lot of short distance workouts to prepare for this, but you just can’t get used to the heat; today was crazy hot.” said Miyagi.

Guam’s professional athlete Mieko Carey stormed in as the 3rd female finisher, 4th overall, with a 2:28:04 to almost secure a clean sweep of top female finishers, which would have been an event first.

Another familiar face competing was runner Ryan Matienzo, who only participated in the bike and run portion of the race as he plans to eventually ease into the swimming portion.

“I’m still years away from competing in the swimming portion. I’m still trying to incorporate biking then running because I was two minutes behind in my run!,” added Matienzo.