The JFK Islanders ended the IIAAG boys volleyball season with a win over the ND Royals, breaking a (3-5) tied season record at the Islander court Tuesday night. JFK had to fight off a willing ND squad in straight sets 25-22, 25-21. 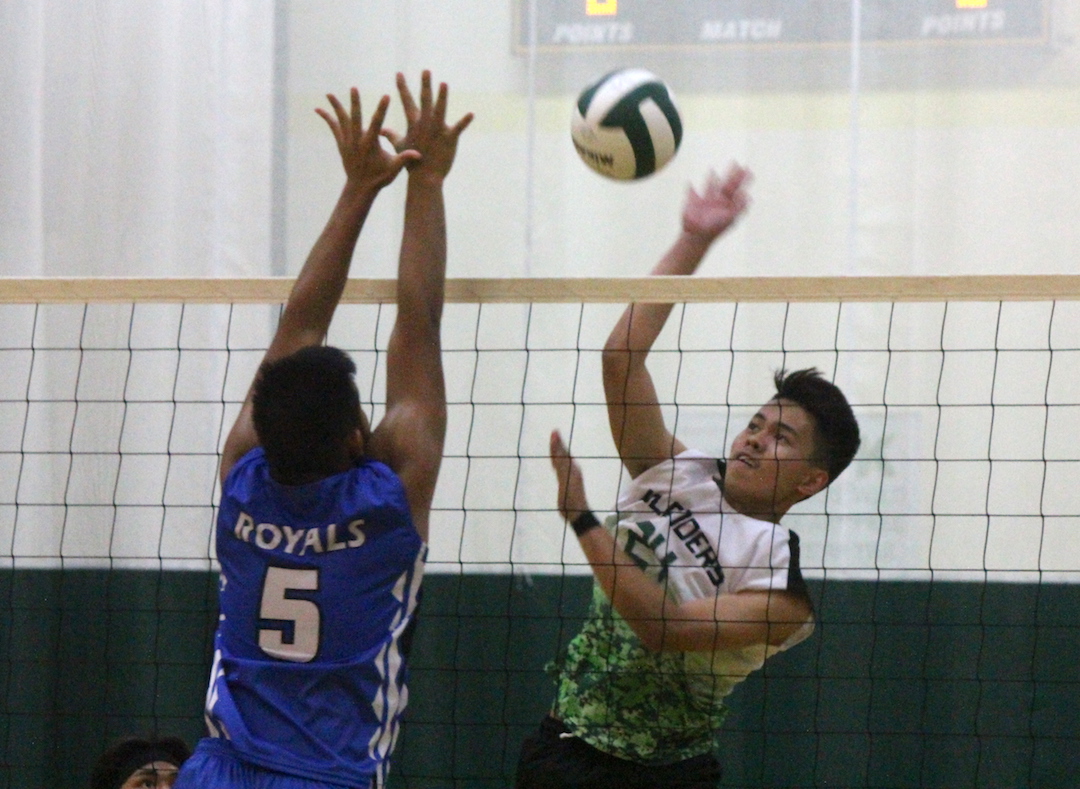 The JFK Islanders ended the IIAAG boys volleyball season with a win over the ND Royals, breaking a (3-5) tied season record at the Islander court Tuesday night. JFK had to fight off a willing ND squad in straight sets 25-22, 25-21.

It was senior night for the Islanders, but only two members of the volleyball team were able to take part in the homecoming event in Nolan ‘The Protean’ Chamberlain and Dean Jesus. Chamberlain led the Islanders with seven total kills while Jesus was the closing factor in both sets.

“It’s definitely a little strange,” said Nolan on him and Jesus being the only seniors on the team. “Coming from basketball, football and baseball where there were multiple seniors, having a senior night for us two was strange, but we knew it was going to be like that since the beginning of the season.”

ND’s Holden Barcinas had the Royals looking strong in the opening set after registering his fourth kill to a 15-11 1st set advantage. Errors would allow the Islanders to chip away at the lead before eventually tying the contest at 17.

Chamberlain grabbed his second kill to give the Islanders their first lead 18-17 and also helped spark a 4-0 run at the service line to keep JFK ahead 23-21. The final two points came from kills off the block from Jesus to complete the small Islander comeback.

The 2nd set featured a cleaner game for JFK with more teammates getting involved. James Mallanao broke away from a back-and-forth series with ND in the set by knocking three straight aces to give the Islanders a 12-10 lead. Chamberlain had three early kills and teammate Seiji Endo went two-hands on a big block put JFK up 19-13.

“We gelled better in the second set and our communication was better as well. The mistakes we made in the first set were due to us not really playing like a team.”

ND crept back into the game down 23-17, getting within 23-21 after a Barcinas kill. Seiji put an Endo to the Royals run with a kill from the outside and Jesus went up and over for the final point, giving JFK the much needed win before the playoffs.

“Breaking the tie was very important for us. We want to go into the playoffs with momentum and beating these guys shows that we’ve improved. This makes our playoff road just a little bit easier,” said Chamberlain.

Islander Nolan Chamberlain flies for a kill in the second set. (photo by Robert Balajadia)