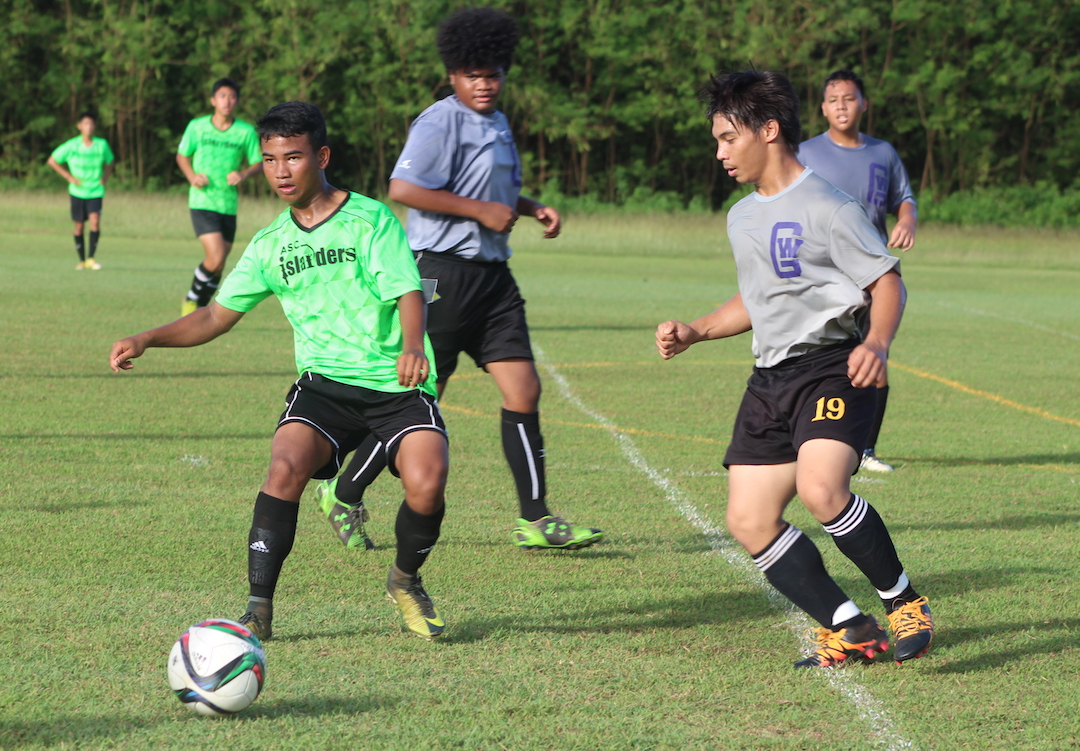 The IIAAG’s boys soccer defending champion JFK Islanders appeared in championship form at the UOG Field Thursday evening where they faced the home team GW Geckos. Laser focused and out to defend last year’s title, JFK dominated the GW from beginning until end, blanking the Geckos 10-0.

The Islanders were led by a mix of veteran players and youth, including freshman Tayler Bonner who achieved a hat-trick.

A nice breezy afternoon was the stage for the defending champion Islanders and JFK came out the aggressors early and were able to get the front line in their groove. Ball control was in heavy favor of the the Islanders as they struck within the first 10 mins of play off the foot of Kris Fernandez, who found the back of the net on a rebound shot.

Minutes later, freshman standout Tayler Bonner booted in his first of three goals. The Gecko defense had their hands full with the entire JFK strikers and midfielders who flooded the box at will. GW was never really able to find any offensive rhythm in the first half. Meanwhile, the Islanders had their way, finding holes in the defense and finished the first half, leading 4-0 with scores also coming from Juan Sarmiento and Takumi Ito.

Familiarity and chemistry played an intricate role in JFK’s success according to Bonner.

“I’ve played with these guys in middle school and outside leagues. So we’re familiar and play together really well,” said Bonner.

The team chemistry was on full display into the second half. Bonner set the tone with the youngster’s second goal of the match, a team high by the way. The defending champs went on to finish out, doubling their lead and leaving Mangilao with the double-digit victory.

GW will aim to bounce back against the Sanchez Sharks Saturday while the Islanders prepare for a big championship rematch against the St. John’s Knights.

Takumi Ito of the Islanders dribbles the ball upfield. (photo by Robert Balajadia)