The JFK Islanders were in danger of losing their early season prefect record, stretching into three sets against the Tiyan Titans in a IIAAG Girls Volleyball Gadao Division showdown Tuesday evening at the Tiyan gym. 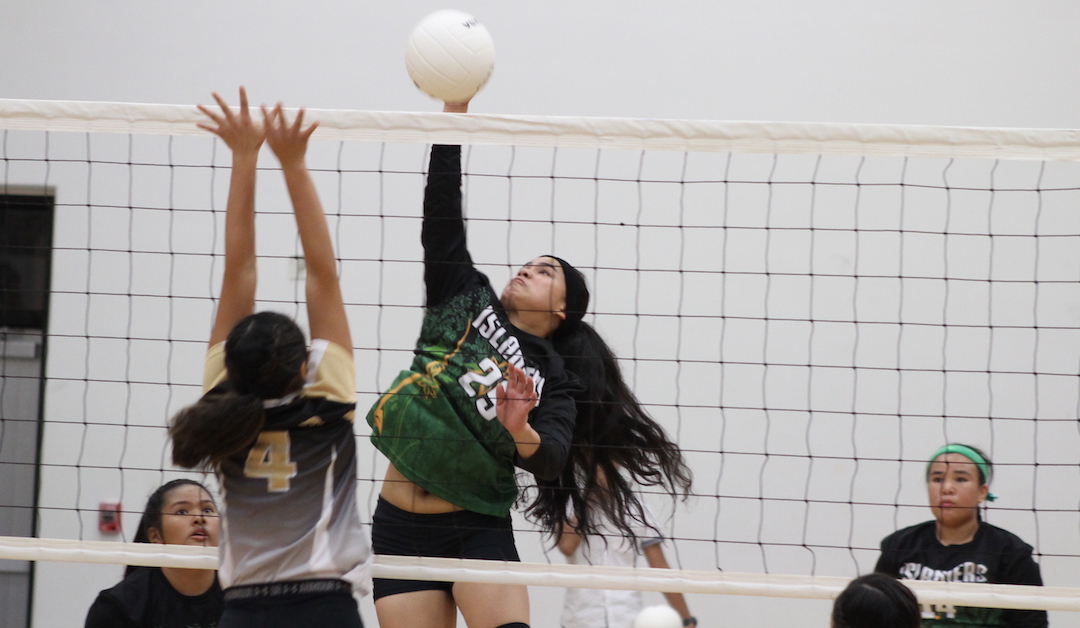 The JFK Islanders were just two points away from relinquishing their perfect record (4-0) to the home team Tiyan Titans (1-3) Tuesday in a Gadao Division showdown in the IIAAG girls volleyball season early goings.

The Notre Dame Royals, the only other undefeated team, easily cruised by the Guam High Panthers 25-8, 25-11.

“We came in to this game with bad mindset,” said Islander middle blocker Eddyanne Sablan. “We thought that just because we have an undefeated record, we came in thinking tonight was going to be easy. Losing the opening set was a wakeup call to us.”

Sablan came to the rescue after deja vu occurred in the 2nd set with the Islanders giving up a sizeable lead to a Titan rally.

Down 21-15 for the second straight set, the Titans were aggressive on their attack with kills coming from both the outside and right side hitters Y’lisiah-rai Jorda and Ajia Fegurgur as part of a 4-0 run to get within 21-19.

Jorda then went above the next a few plays later for a thunderous kill to knot the game at 23 with Tiyan appearing to be on a game-sealing momentous run. Instead, JFK settled in and allowed Sablan to hammer home a set-winning kill to send the contest into the final set.

“We knew that pushing for a 3rd set was a chance for us to restart. With that restart, we played more serious. Our communication was better and we trusted each other. We played sloppy in the 1st set and we motivated each other through it because we know we’re better than how we came out to this game,” added Sablan.

JFK didn’t hold back in the 3rd by quickly jumping out to a 9-1 lead with the Tiyan rally train running out of steam. Sablan set the tone midway through, register her third kill in a four-point span to put the Islanders firmly ahead 18-7.

Tiyan went on a four-point spurt in their last ditch effort, but errors and a put-away kill from Islander Kiyoni Yamaguchi were all that JFK needed to escape the early season upset.

Tiyan will travel to Academy in their next game and the Islanders will play in the always rocking Harvest Eagles gym Friday.

Titan Ajia Fegurgur gets a kill in the 2nd set as part of a Tiyan rally. (photo by Robert Balajadia)

Tiyan’s Y’lisiah-rai Jorda gets a big kill to tie the game in the 2nd set. (photo by Robert Balajadia)

Islanders libero digs a serve in the opening set. (photo by Robert Balajadia)

Titans Monique Benavente attacks from the outside for a point in the 1st set. (photo by Robert Balajadia)

BANNER NOW WITH THE CLEVELAND BROWNS
GABA MAKING A DIFFERENCE IN THE COMMUNITY
Loading Comments...