The top two seeds of the IIAAG girls soccer season, in the ND Royals and GW Geckos, will face off in for the league title Saturday after both team earned slim semifinal victories Wednesday evening at the GFA Training Facility in Harmon. 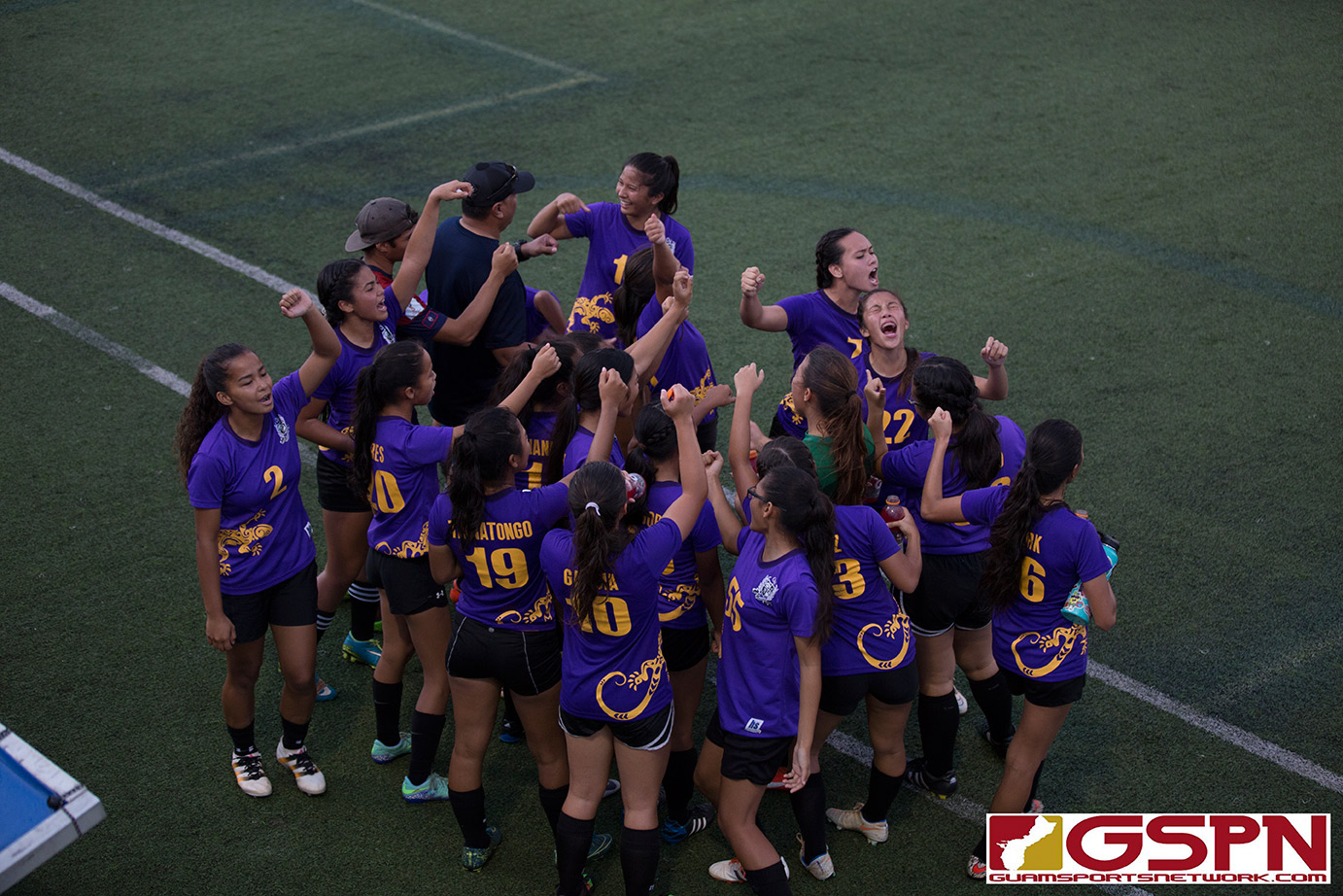 The top two seeds of the IIAAG girls soccer season, in the ND Royals and GW Geckos, will face off in for the league title Saturday after both teams earned slim semifinal victories Wednesday evening at the GFA Training Facility in Harmon.

The Geckos survived early game drama to get past the 5th-ranked Harvest Eagles 2-1 in the first game while the ND Royals found their offense late as they overcame the tough defense of the 6th-ranked Sanchez Sharks in a 2-0 win.

Four minutes into the match, the GW defense dropped a ball back to keeper Tamika Hechinova to reset field position. Instead of a routine drop back, the momentous kick traveled at a much faster pace than anticipated, rolling out of Hechinova’s reach to put GW in a bizarre 1-0 hole early.

“It definitely gave us anxiety,” smiled Johnson. “It was just miscommunication, but we really wanted to win today so we had to work hard and stay composed.”

GW managed to knot the game just before halftime as league MVP Colleen ‘The Score-ceress’ Naden proved her wealth as a passer, crossing a beauty to teammate Kiara Pangelinan for a 1-1 tie at the 36th minute. Pangelinan flew in and used a karate kick to break GW out of a scoring slump despite the team firing off 13 shots at goal.

With the wealth of talent on the Gecko roster, Pangelinan’s goal is just a small reminder that all 11 players on the field play contributing factors in their success.

“It’s just great to help the team get the win. We don’t try to be the star of the team, we’re all one team and I try my best to contribute in any win. Our defense was great today and they allowed our offense to take as many shots as we did,” added Pangelinan.

Ten of the Geckos first half shots were deflected away as Eagles keeper Luna Puangco had a a big 16-save night.

GW turned to former MVP Skyylerblu Johnson early in the second half on a free kick from 30 yards out as Johnson rocketed a shot just out of Puangco’s reach in the 43rd minute.

Defense prevailed keeping Harvest to just one second half shot after the Eagles managed just four in the first half.

Johnson had been dreaming of playing in a title game since sitting injured on the sidelines as her teammate Sharks won the title back in 2015. She now gets the chance to play in the big game and she’s going to enjoy every moment of it.

“I know my team is really excited too so we’re going to be hitting practice this week and work on everything we need to in order to hopefully win that championship,” said Johnson.

Wendy’s Players of the Game Skyylarblu Johnson and Kiara Pangelinan.

The Sanchez Sharks were well aware of the ND Royals offensive firepower which made their heavy defensive backline tough to score on. It took 67 minutes for the Royals to finally crack the Sharks defense and a late goal sealed their spot in the finals.

Royals midfielder Hannah Cruz had a busy evening, often dropping back on defense. It wasn’t until opportunity knocked, with a foot, as teammate Davie Rae Lefever dropped a ball to a wide open Cruz from 35 yards out. Cruz used a chip shot that was well short of the goal, but took a favorable bounce right over the Sharks keeper for a surprising 1-0 lead.

“I didn’t kick it as hard as I wanted to, but it took a great bounce and the goalie mistimed it,” said Cruz on the goal. “It was really difficult to score and we knew that they were going to play aggressive. We had to be patient and work our way towards it.”

The Sharks struggled to find their offense late which set the stage for Royal Shyann Roberto, who used a through ball on the left side of the field to net the games final goal in the 78th minute.

ND accumulated 22 shots at goal while the Sharks only attempted eight total, with five coming in the first half.

The regular season matchup was a close contest and many fans are expecting much of the same on Saturday. Regardless of what happens, the ND Royals are just going to stick to the game plan.

The title game kicks off at 7 pm at GFA following the consolation game between the Eagles and Sharks at 5 pm.