Neither the ND Royals (7-0-1) nor GW Geckos (7-0) girls soccer teams have a tally in the loss column this season, but Saturday’s showdown was destined to change that. The Royals beat the undefeated Geckos 2-1 Saturday evening at the GW field to shake up the standings. 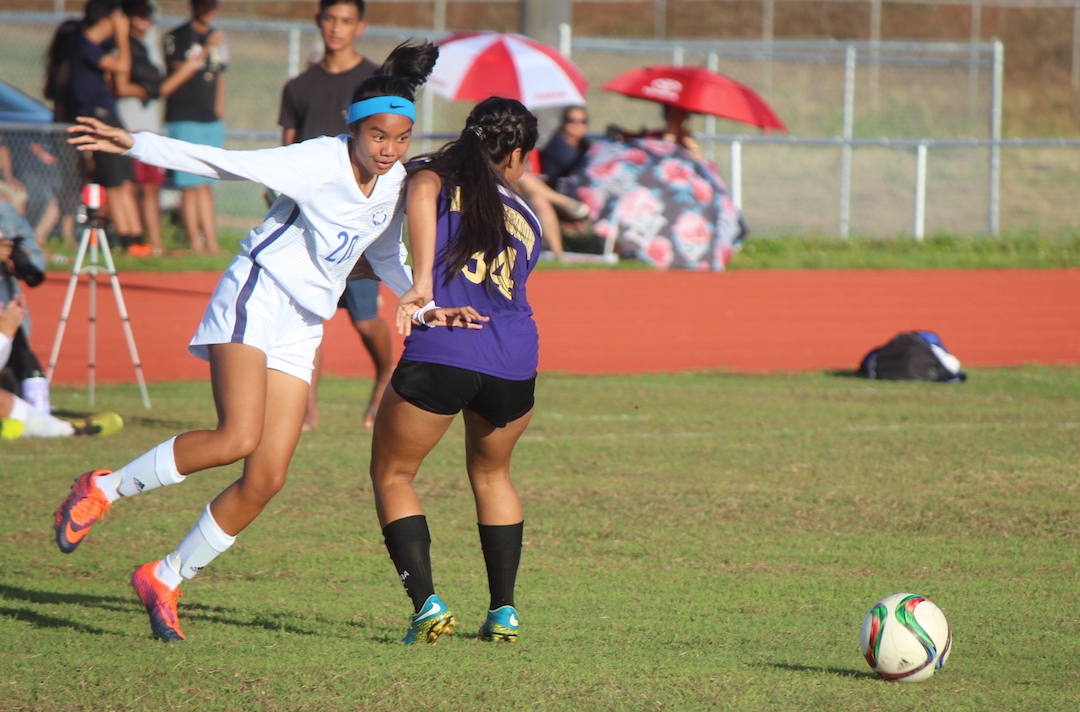 Neither the ND Royals (7-0-1) nor GW Geckos (7-0) girls soccer teams have a tally in the loss column this season, but Saturday’s showdown was destined to change that. The Royals beat the undefeated Geckos 2-1 Saturday evening at the GW field to shake up the standings.

The entire first half was all about defense for both teams, neither the Royals nor Geckos allowing a goal. The goalies on both ends of the fields led the defensive edge for both teams, each registering extraordinary saves on precise shots. GW capitalized on keeping the ball in goal kick range during the first 45. There was one opportunity for the Royals to score, however, when a GW got a penalty. The kick was missed, the wind taking the ball with it.

“My defense did really well today, and backed me up, this was very important,” says ND goalie Erin Anulao on the first half defensive performance.

The second half was completely different with both teams amping up the offensive intensity.

The GW offense was the first to strike in this important match-up. A goal was made after a ball ended up between the goalies feet, making it roll into the goal thanks to pressure from Jalana Garcia. The score was now 1-0 with GW striking first blood.

After the score, Anulao would go on to make ten more saves and allow no more Gecko goals.

This set off the Royals offensive cause. Their first goal was scored at the 58 minute mark off the foot of stellar sophomore Brianne Leon Guerrero, tying up the game at one goal each.

“I got a good pass from teammate Davie Rae Lefever, so I took the opportunity and kicked the ball, I think once we shut down high scoring teams, our momentum from the defense helps.”

The last goal came only 12 minutes later, at the 70 minute mark from the senior Randi Paulino, making the score 2-1. Paulino broke free after a careless handled ball by the Gecko defense where she nearly out-ran her dribbling. Instead of booting in a left-foot shot, Paulino went with the right foot from the left side of the goal for a game-breaking score.

“I really didn’t think it had a chance,” admitted Paulino on her shot. “I didn’t want to kick it with my left foot because it would hurt!,” she laughed.

The final score from GW, was 2-1, undefeated ND ending the Geckos undefeated season. The Royals are now the only girls soccer team without a loss with the playoffs vastly approaching.