BULLDOGS AND SHARKS BATTLE TO ONE GOAL TIE

The Sanchez Sharks and Okkodo Bulldogs played to a 1-1 stalemate on Wednesday afternoon in the IIAAG Girls High School Soccer League. 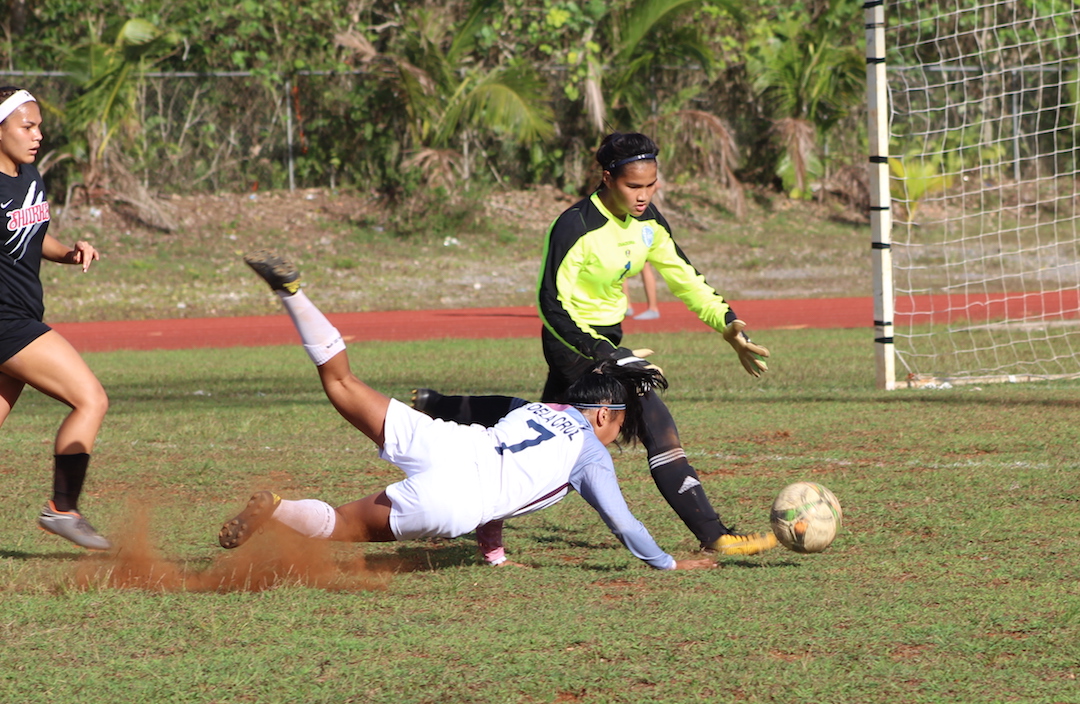 The Sanchez Sharks and Okkodo Bulldogs played to a 1-1 stalemate on Wednesday afternoon in the IIAAG Girls High School Soccer League. The two teams played a defensive-minded game that ended in a scoring frenzy, with each team scoring a goal in the final 10 minutes.Taylor Paige Aguon scored off a header for Sanchez to put them in the lead, while Janisha Santos booted in a free kick for Okkodo to tie things up and end the game in a draw.

The fireworks started at the end of the second half, with each team giving their all to try and get the win. The Sharks struck first in the 70th minute off of Aguon’s header. Sanchez had picked up the intensity in the second half but couldn’t break through until Caylani Estoy launched a long-range effort that bounced off of the crossbar; Aguon seized the opportunity by heading in the rebound before the Bulldog keeper could corral it.

Trailing for the first time all game, Okkodo knew they needed to pick up their game. The Bulldogs caught a lucky break in the 76th minute when they were awarded a free kick just outside the box. Santos stepped up to take the kick and blasted it past the Sanchez keeper, hitting the crossbar and bouncing in.

When asked how the Bulldogs responded when they were facing defeat Santos said: “We were out there just giving our all and playing with heart,because we knew we needed that goal.”

The Sharks stretched the field effectively throughout the game thanks to Estoy’s control of the midfield. Aguon and Estoy were able to pressure the Okkodo defensive line all game with shots on goal. “We were able to work more as a team and use communication to open up the field and play our game today.” said Aguon.

The Bulldogs looked like the more dangerous team early getting multiple goal-scoring chances in the first half. Santos and Shermia Cruz each had shots that clanged off the crossbar to keep the score at 0-0. Okkodo had plenty of opportunities but couldn’t find the back of the net until Santos’ free kick.

The game ended in a deadlock which was fitting as each team gave an all-out effort throughout the first and second half. The 1-1 scoreline showed just how tough the defensive showings by each team were.

Both teams came into the game with two wins on the season and the draw allows them to split the points in the standings. With teams starting to find their rhythms this season the Sharks and Bulldogs look to distance themselves from the pack. Sanchez has a tough task as they take on the defending champion, ND Royals, next Monday at Leo Palace. Meanwhile Okkodo will host the JFK Islanders next week Tuesday as they continue their season.

TITANS ROLL IN STRAIGHT SETS WIN OVER DOLPHINS
THE ROAD TO THE GVFL FINALS: RAIDERS VS. EAGLES