The FD Friars were firing on all cylinders offensively as they took down the IIAAG’s only unbeaten team left in boys volleyball, dropping the Tiyan Titans in straight sets 25-18, 25-19 Tuesday night at the FD Phoenix Center. 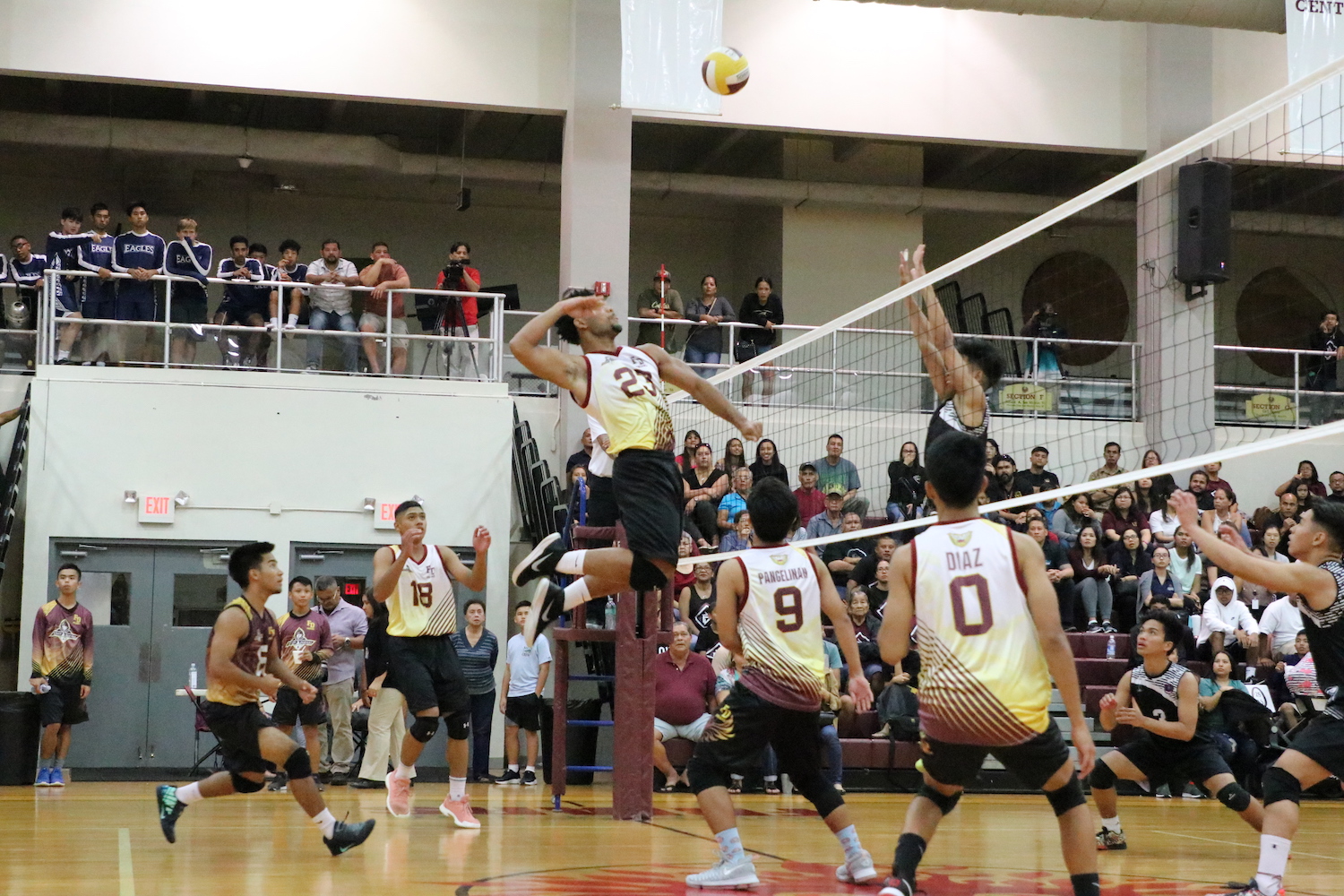 The FD Friars were firing on all cylinders offensively as they took down the IIAAG’s only unbeaten team left in boys volleyball, dropping the Tiyan Titans in straight sets 25-18, 25-19 Tuesday night at the FD Phoenix Center.

The usual suspects led the way for the Friars as Aidan ‘Moon Walker’ McDonald flourished with nine kills while teammate Nathaniel Kyle Gaitan added seven. But the total kill share from the Friars equated to 25, which meant a busy night for setter Logan Pangelinan. With his hitters coming to play, Pangelinan was able to throw the Tiyan defense off balance.

“Everyone was looking for Aidan since he’s our main gun, but when everyone gets involved like that we become unpredictable,” said Pangelinan on the teams big game.

Defense at the net was key for FD in the later part of each set as middle De’Aundre Cruz and Brandon Mendiola never allowed the Titan offense to get into rhythm. Mendiola finished with three blocks and three kills while Cruz put in his best game of the season with five kills and four blocks.

Wendy’s Players of the Game: Logan Pangelinan and De’Aundre Cruz

Cruz was a part of the championship team in 2016, but took a year off of volleyball to compete in track and field for 2017. Back for his senior season, Cruz is starting to get into the flow of his teams play as they prepare for a tough playoff stretch.

“I haven’t been playing to my potential so going into today, I really wanted to play harder for my team. I didn’t want us to rely on just a couple of guys, I wanted to be a factor as well,” said Cruz on his big night.

The Friars last two meetings with the Titans prior to Tuesday’s game ended in critical losses. Being bounced from the semifinals in 2017 and losing to the Titans in the 2018 pre-season championship game left a bad taste in the Friars mouths and they were determined to get one back.

“These guys still fought to the end. This was kind of a redemption game for us, but we know we can never take them for granted or count them out. But grabbing this win was important for us,” added Pangelinan.

Four different Friars got into the act early as Pangelinan got kill participations from McDonald, Noah Diaz, Mendiola and Gaitan as they raced out to a 10-5 lead. A 6-0 run from the Titans capped off by a Padigos block gave Tiyan their first lead at 11-10.

Cruz asserted himself on a kill up the middle, his first of the game, to put the Friars up 17-14. The offense continued to roll with McDonald notching his sixth kill of the set for a 20-14 advantage.

“I started to feel it when I got my first kill and my first block. That really gave me the motivation keep it going,” added Cruz.

The Friars jumped out to a 17-10 lead after a big kill from Gaitan as they looked ready to put the Titans away. Padigos and the boys proved they had more fight left in them after going two hands on a big block on McDonald, followed by a kill to get Tiyan within 17-13.

The Friars got a kill from Mendiola to go up 19-13, but Padigos disrupted the Friar flow twice more by blocking back-to-back hits to get within 19-17, part of a short 4-0 run. Errors from both sides allowed the Friars to regroup for one final run.

Cruz returned the favor as he got two hands on a big block up the middle for a 22-18 lead, followed by his third kill for a 23-18 turn. Pangelinan then let a backset fly in the airspace of McDonald, who shut the lights out with a hammer down the middle for a 24-18 score. Tiyan’s night would end on a Cruz spike that sailed out of bounds completing the straight-set sweep.

Ramil Padigos goes up for a kill in the 2nd set. (photo by Victoria Smith)

Nathaniel Kyle Gaitan rises up for a big kill in the 2nd set. (photo by Victoria Smith)

Rick Untalan goes airborne for a swing towards the back row. (photo by Victoria Smith)

Titan Jericho Snaer tries to get one to go over the Friar blockers. (photo by Victoria Smith)

Tiyan’s Jude Cruz and Ramil Padigos get hands in on a shot from De’Aundre Cruz. (photo by Victoria Smith)

Friar Noah Diaz gets the first kill of the game. (photo by Victoria Smith)