The GW Lady Geckos started their season off strong with a compelling 2-0 victory over the Academy Cougars on Wednesday afternoon in the IIAAG Girls Soccer League. 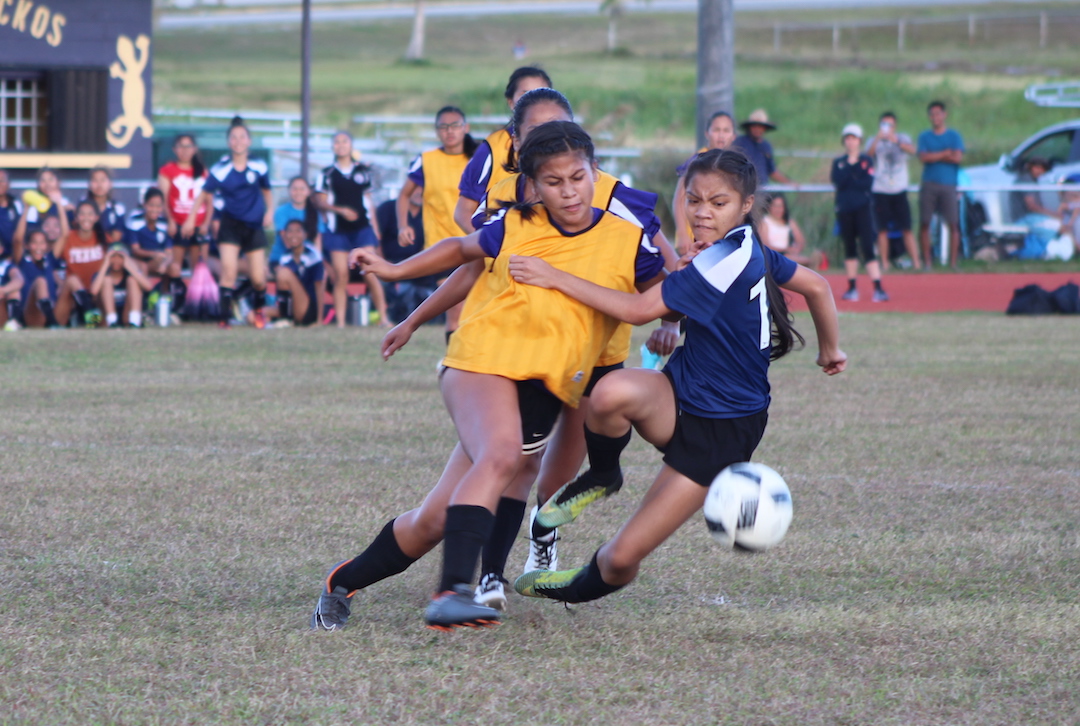 The GW Lady Geckos started their season off strong with a compelling 2-0 victory over the Academy Cougars Wednesday afternoon in the IIAAG Girls Soccer League. Goals by Kamaren Gumataotao and Kiara Pangelinan and a solid-all around effort by Jalana Garcia propelled GW in their win.

This season presented new challenges for the Geckos, who come into this year as a different team than the one that made the championship game in 2017. They have huge holes to fill thanks to the loss of last year’s MVP Colleen Naden to graduation and the absence of Skyylerblu Johnson, who won MVP two seasons ago.

Even with the new look team, their expectations are still high. “ We’re a young team but we have potential and our main focus is just to work hard this season and keep pushing to be better every game,” said Pangelinan.

Early in the game it was back to business as usual for the Geckos. Garcia led the offense to push the ball up early, pressuring Academy keeper, Faith Moylan, with multiple shots on goal.

Gumataotao put the first score on the board in the 23rd minute, receiving a cross inside the box and blasting it past Moylan for the 1-0 lead.

Gumataotao credited the goal to great teamwork saying, “It was all about communication and having the right mindset.”

Wendy’s Players of the Game – Kameren Gumataotao and Kiara Camacho

The Geckos continued to find and create shots in the first half but the Academy defense was stout, keeping the game close going into halftime.

The Cougars offense came out strong in the second half, playing with more intensity and pressing the Gecko defense. Thea Baker and Mia San Nicolas continually found their way inside the box but couldn’t seem to connect with any of their shots. San Nicolas had two free kicks that were both saved to preserve the GW shutout.

With Academy pushing to get back into the game, Garcia switched from offense to defense and immediately made an impact. She made multiple defensive plays and urged her teammates to pick up the intensity. The Geckos responded by turning back any Cougar attack and keeping Academy scoreless.

In the final minute of the game the Geckos were able to go back on the attack. They earned the ball back after an Academy corner kick, and Pangelinan capitalized off the counterattack, chipping the ball over Moylan to seal the win and put her GW up 2-0.

With the win the Geckos showed that they have no signs of slowing down this season. They will be looking to continue their strong start against Sanchez on Saturday. The Cougars challenge another talented team, the St. John’s Knights, on Friday where they look to bounce back.

Cougar Mia San Nicolas races down field after a through ball. (photo by Robert Balajadia)

Gecko Jalana Garcia takes a shot from the outside. (photo by Robert Balajadia)

Gecko Kameren Gumataotao gets a free shot for the first goal of the game in the 23rd minute. (photo by Robert Balajadia)