The GW Geckos picked up a win in a IIAAG Boys Volleyball Tuesday evening showdown against the Southern Dolphins that stretched into three sets 26-24, 23-25, 25-18. GW overcame an error filled evening, getting a strong defensive performance from senior Kyler Diego to hold off the Dolphins. 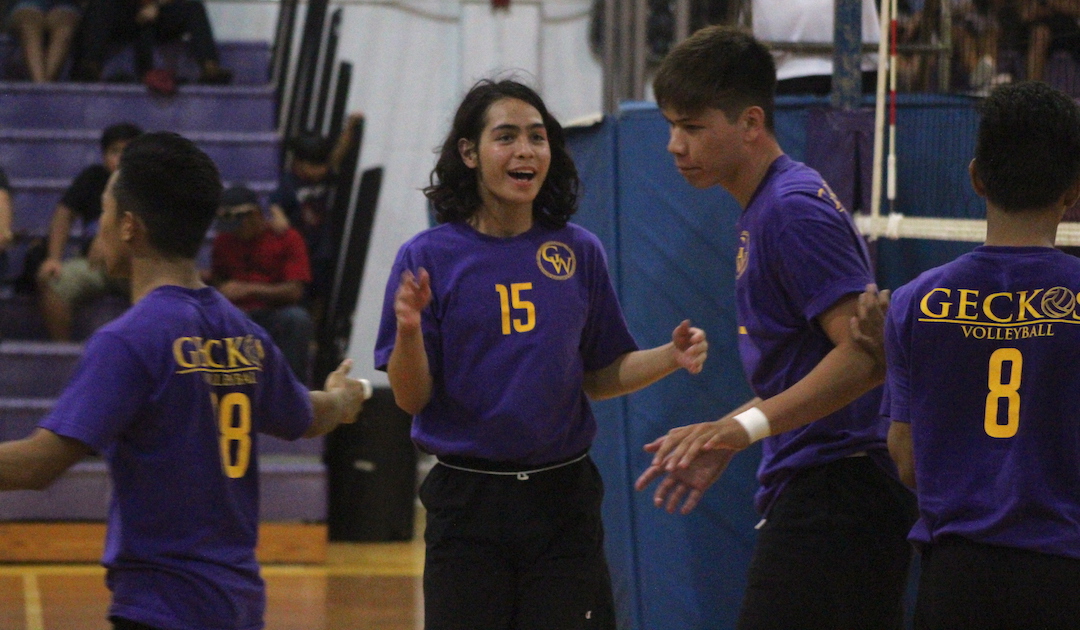 The GW Geckos picked up a win in a IIAAG Boys Volleyball Tuesday evening showdown against the Southern Dolphins that stretched into three sets 26-24, 23-25, 25-18. GW overcame an error filled evening, getting a strong defensive performance from senior Kyler Diego to hold off the Dolphins.

Errors prevented the Geckos from holding on to both of their big leads in the 1st and final set as the team is still searching for its identity in the season’s early goings.

“We’re working with a brand new starting line-up and we only have three returnees in that line-up so there was a little bit of miscommunication,” said Diego.

Diego provided a kill and an ace in the final three points to secure the Gecko victory.

“My defense and servicing where on today. Coach makes us always work on defense, pin-point passing and serving in practice, especially moving our feet on defense,” said Diego on pulling out the win.

Up and down sets

With the score tied eight all in the 1st set, Diego grabbed his first kill of the night to give GW a 9-8 advantage. Diego then stepped up to serve, orchestrating an 8-0 Gecko run to go up 16-8. The Dolphins made their own 6-0 run behind a pair of kills from John Lopez to get within 20-19.

Lopez picked up an ace from the service line to knot the game at 21 with Southern taking their first lead of the set 24-23. Errors would plague the Dolphins after giving up the final two points to the Geckos on errors.

GW ran into issues of their own in the 2nd set after spotting the Dolphins four-straight points off of unforced errors to tie the game at 16. Hitting errors and setting errors would subdue the Geckos despite a pair of kills from Diego and middle Brendan Santos to get within 24-23. A hitting error from Gecko Koby Pocaigue gave Southern the 2nd set victory.

The Geckos posted an early 10-3 lead after a service rally from Kenly Magwill, but Lopez and the Southern hitters started to creep back another comeback as they only trailed 15-9. Hitting errors from the Geckos were matched with service errors from the Dolphins, allowing GW to close out a hard fought contest.

GW will play host to the FD Friars Friday while the Dolphins host the Harvest Eagles Friday at Oceanview.

The Geckos regroup after a timeout to close out the 3rd set. (photo by Robert Balajadia)

Southern rallies to close out a 2nd set to prevent a GW sweep. (photo by Robert Balajadia)

Dolphin Nathan Naputi gets a defensive pass off to set up a score. (photo by Robert Balajadia)