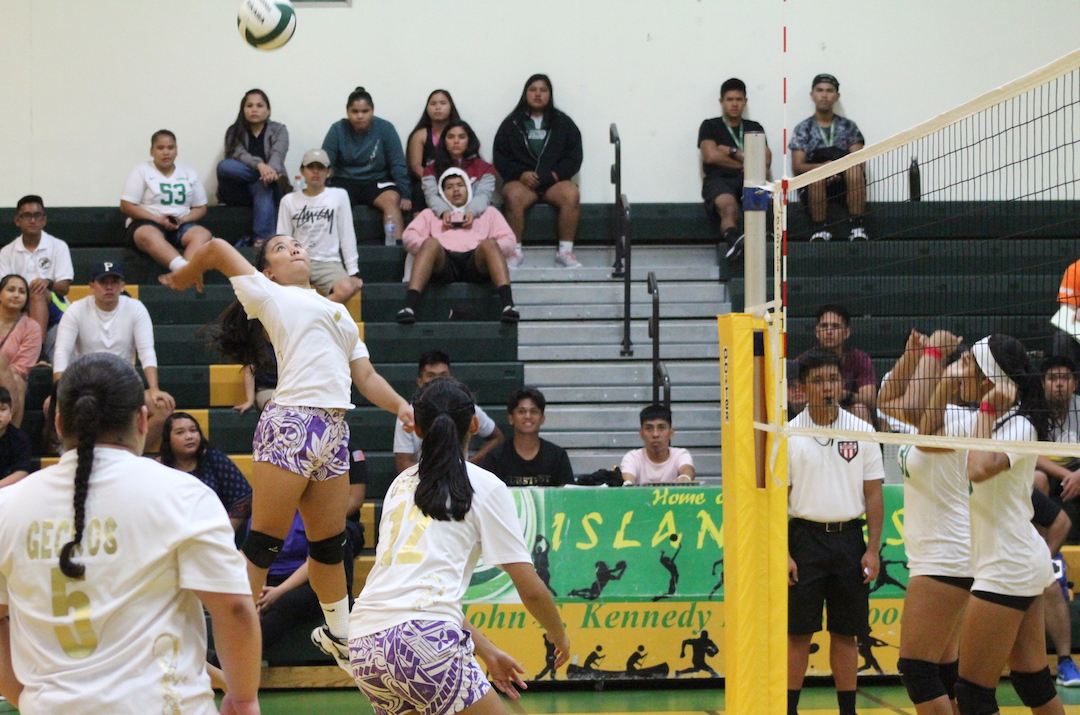 The GW Geckos traveled to Tamuning with hopes to play “smart ball” against a high powered JFK Islanders squad. The Lady Geckos were coming off a humbling loss to the St. Paul Warriors knew they had to “keep pushing and go up from there” according to GW middle blocker Evita Laguana.

Stamina and patience were definitely the theme throughout this contest with the Geckos locked in early, despite a second set communication breakdown to ultimately outlast the home team. Geckos beat JFK in three hard fought sets, 25-16 17-25, and 25-23.

Both sides were excited to get things started as the Geckos jumped out early to secure their dominance up front. Led by Kiyoko Afaisen and Lyric McGill, GW powered their way through much of the set by just simply placing the ball where the JFK defense wasn’t. Positivity was a factor as well as the Geckos were ready for what JFK was dishing out on offense.

McGill plugged up any gaps at the net and GW started to separate on the scoreboard leading by five, their biggest of the evening to that point 18-13. Momentum was also in favor of the purple and gold, the normally raucous Tamuning faithful were silenced throughout the first set. Geckos win the first 25-16.

Looking to keep the good vibes rolling, GW looked poised and focused to start the second set but JFK had other plans. The Lady Islanders made the necessary adjustments during the break and it showed. The Islanders’ Kiyoni Yamaguchi found her stride about half way through and there was no looking back for the outside hitter.

Teammmate Maiya Taijeron gave her all holding down the middle notching dig after dig. The Geckos stayed silent on the offenseive side as they struggled to find rhythm. JFK would run away with the second set with ease 25-17.

The deciding set did not disappoint. Richelle Tugade got things started for the home team earning two quick points off quick serves. The magic died off a back and forth, exciting, suspenseful volley that GW managed to turn into a point of their own.

The Geckos jump ahead riding the building momentum of the big blocks at the the net turned in by Kiyoni Yamaguchi and Evita Laguana. Not wanting to dissapoint the home crowd JFK hung around off the defense contributions Valerie Escalona and Dame Hular.

Both sides endured gritty battles at the net and nail biting volleys, but in the end the lead was too much for the Lady Islanders to over come. Geckos take the match by winning set three 25-23.

Gecko Kiyoko Afaisen sets up her hitters on a free ball. (photo by Robert Balajadia)

Gecko Kirsten Santos provides stability to the backline during the final set. (photo by Robert Balajadia)

Gecko Mikayla Castro skies for a spike in the final set against JFK. (photo by Robert Balajadia)

The Islanders struggle handling serves in the opening set. (photo by Robert Balajadia)