For the second year in a row, the St. John’s Knights finished atop the preseason ranks as they defeated the GW Geckos in three sets 20-25, 25-20, 15-10 in the Shieh Preseason Volleyball Tournament. Leading the way for the Knights was junior Hallie Wigsten, who finished with 11 total kills in the game. 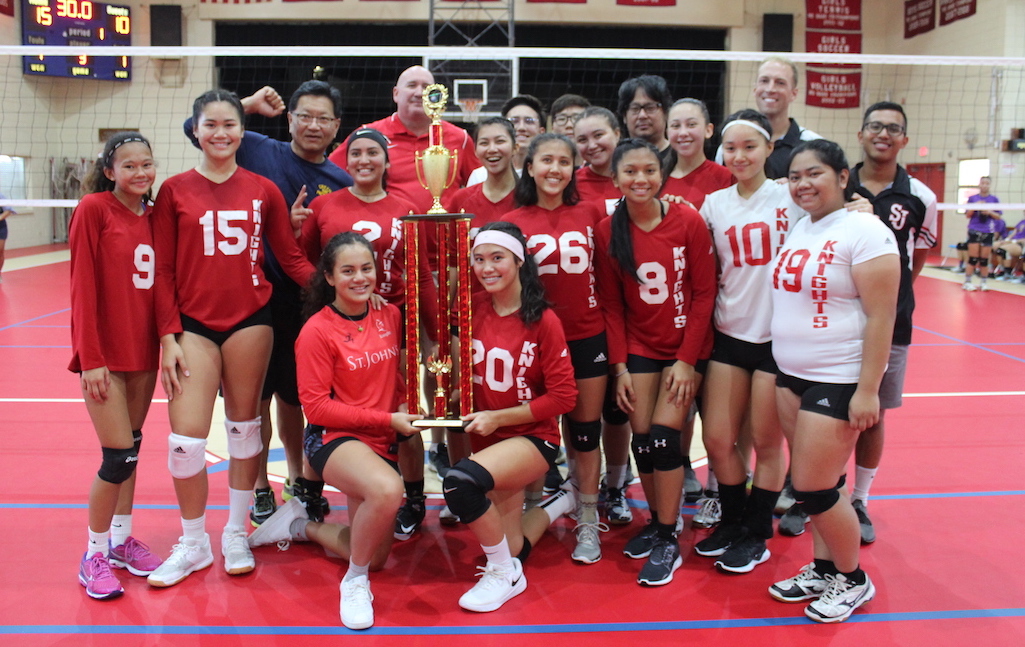 For the second year in a row, the St. John’s Knights finished atop the preseason ranks as they defeated the GW Geckos in three sets 20-25, 25-20, 15-10 in the Shieh Preseason Volleyball Tournament. Leading the way for the Knights was junior Hallie Wigsten, who finished with 11 total kills in the game.

Wigsten took over the pivotal 2nd set where she locked in six of her kills to force the 3rd. Despite trailing 5-0 from an early GW rally in the 3rd, the Knights calmly battled back as their offense started settled in to the late parts of the game.

After a full days worth of volleyball, the Knights got a good look at where their team stands as the season is set to begin next Tuesday. Knights setter Setter Hana Fernandez is dealing with an injury that has forced the team to adjust which is what the Knights were focusing on in the tourney.

“We weren’t focused on winning this tournament, but instead we were trying to get as much practice time in with our usual setter Hanah out due to injury. We have had to make a lot of adjustments and coach [Shepherd] wanted us to try out different positions to work around Hanah’s injury,” said Wigsten.

The young St. John’s team finished second place last season in 2017 and majority of their core is set to return as a more experienced group in 2018. Making it to the finals wasn’t enough for the young Knights as falling short has only made them hungrier.

“Winning this was nice, but we’re going to put this one away and focus on the regular season. Our goal is to make it back to the finals. Coming so close last season hit the team hard so we’re going to be working as hard as we can to win it this time,” added Wigsten.

The Knights will face the Okkodo Bulldogs in the season opener on Tuesday.