The defending champion ND Royals kicked off the 2018 season in a big way with two players, Brianne Leon Guerrero and Shyann Roberto, netting hat tricks in an 8-1 win over the Academy Cougars Monday at the Leo Palace Field. 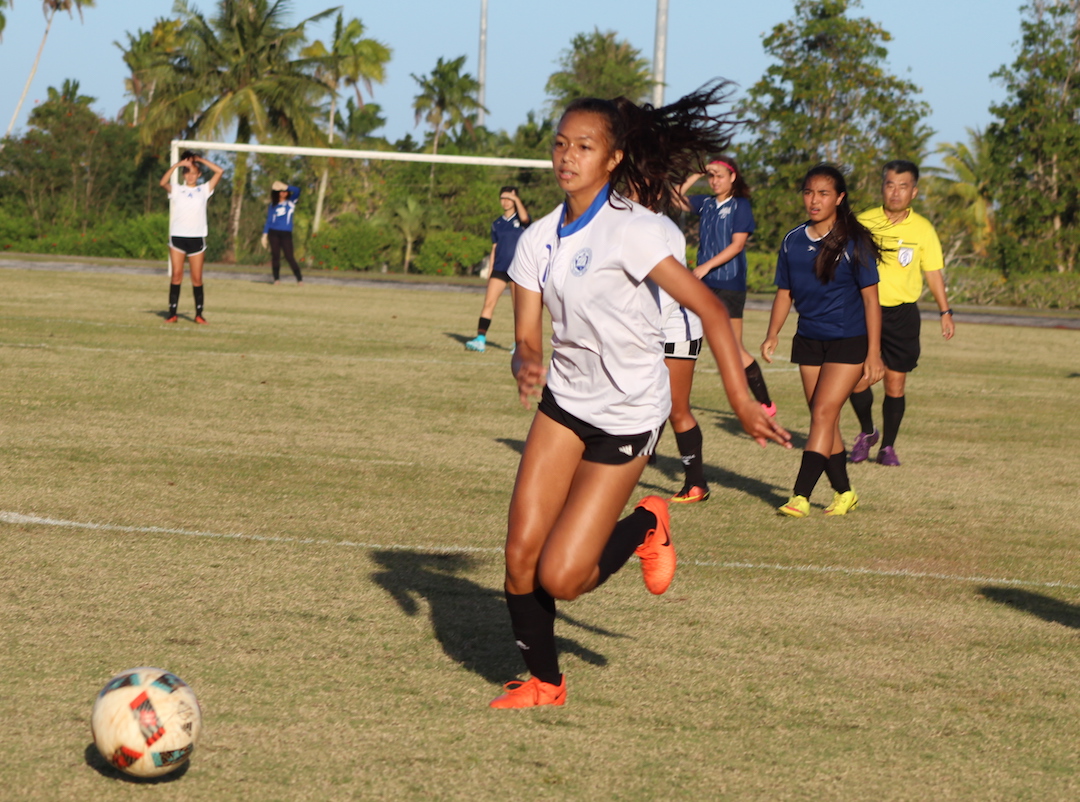 The IIAAG Girls High School Soccer season kicked off on Monday with a dominant display by the two-time defending champs. The ND Royals put in a strong offensive showing in their 8-1 win over the Academy Cougars at Leo Palace.

The Royals were led by Brianne Leon Guerrero, who netted four goals and Shyann Roberto who recorded a hat trick with three goals.

Leon Guerrero said the key to the Royals’ winning ways is chemistry between her and her teammates. That chemistry is evident in the way the Royals play, setting each other up for easy goals and communicating on defense and offense.

“A lot of us have been playing together for a long time, even outside of high school soccer, on the national team, so that extra familiarity really helps,” stated Brianne.

The problems for Academy started early with their starting goalkeeper going down in the first five minutes with an injury. Not long after, Leon Guerrero capitalized by making a run through the defense and putting away her first goal of the game.

The Cougars’ Mia San Nicolas tried to get her team back in the game quickly with her shot getting past the keeper but the ball was cleared at the last second by Royals defender, Minami Rabago.

Midway through the half Leon Guerrero added her second goal and could have gotten her hat trick before halftime, but her header attempt at point-blank range was saved by the Academy keeper. The save kept the score at 2-0 heading into halftime.

The floodgates opened in the second half with the Royals putting the pressure on the Cougars and keeping the ball on their half. Shyann Roberto scored her first goal of the game early in the second half off an assist by Leon Guerrero.

Up 3-0, the Royals only increased the intensity dissecting the Cougar defense and making the Academy keeper work with multiple shots on goal. Leon Guerrero finally got her hat trick midway through the second half, scoring off a deflection after an ND corner kick. Only five minutes later, Carlie Quinata added a goal of her own off cross via header to put the Royals up 5-0.

Academy was able to get on the board late in the game with senior, Sabrina Aguon, booting the ball past ND’s keeper to prevent the shutout and put the score at 5-1.

Leon Guerrero was undeterred, scoring her fourth goal with a long-range shot to put the Royals up 6-1. Roberto was able to add two more goals in the last five minutes of the game, scoring a late penalty followed by the game-sealing goal in the 90th minute. As the final whistle blew the Royals walked away with the 8-1 victory.

Though the big win shows that the Royals are in championship form, Roberto says there is still things to improve as ND looks to three-peat.

“ We lost a lot of good players from last year’s team, and we have to work harder to maintain that championship level. This win definitely gives us confidence and shows us that we are on the right track.”

The Royals look to continue their winning ways next Thursday against St.Paul. While Academy looks to bounce back next Wednesday against the GW Geckos.

Royal Brianne Leon Guerrero gets through the defense to set up a one-on-one where she scored her second goal. (photo by Robert Balajadia)

Cougar Mia San Nicolas tries to get her team going while down three goals. (photo by Robert Balajadia)