All five of Guam’s Micro Games Wrestlers grabbed medals on Tuesday with four gold and one silver in the freestyle division. 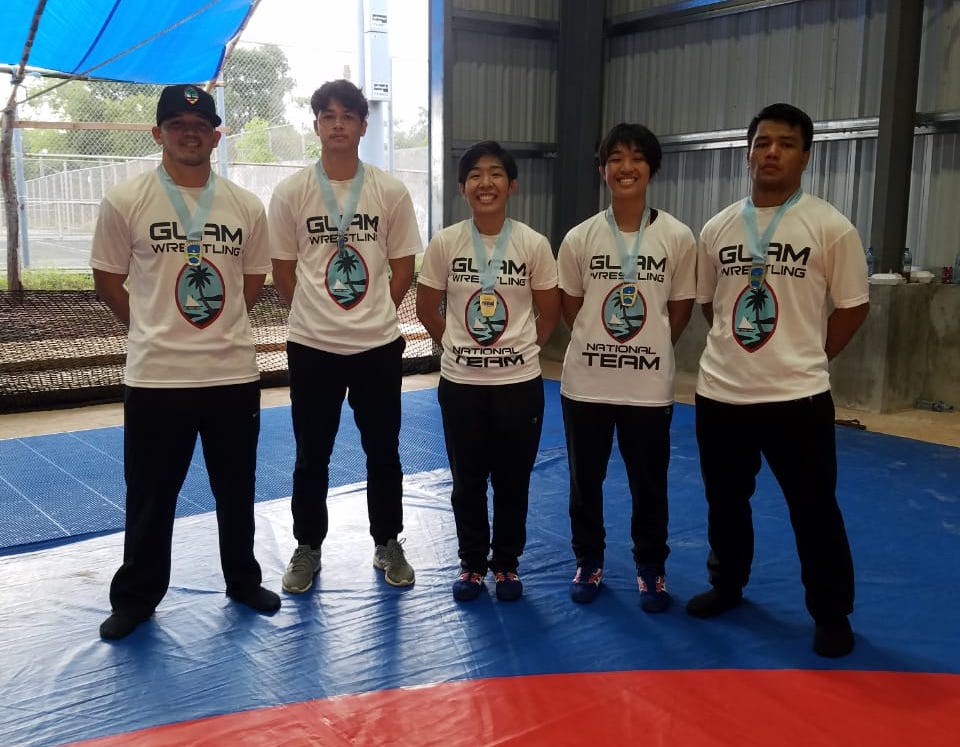 Colonia, Yap – Guam Wrestlers showed out Tuesday afternoon by collecting four gold medals and one silver in the freestyle wrestling division. It was a near clean sweep as John Rojas, Michael Shinohara, Rckaela and Mia Aquino all took Gold. Guam’s Paul Aguon took silver resulting in a full set of medals for all five of Guam’s wrestlers.

“I was feeling very confident. From the first shot I knew that I had that match. It was all about repeating that in the championship round because we work hard every day. I’m still going to get in trouble from my coaches because I messed up,” said Rojas.

And winning Gold was all in a days work for Rojas.

“It was just another day at the office,” laughed Rojas. “I’m proud every time I win something for Guam. We have a lot of athletes out here representing our island and I think we all did good today.”

Rckaela defeated her lone opponent Mayoleen Loanis and Mia Aquino didn’t have an opponent her weight class, resulting in an automatic gold medal.

Guam’s John Rojas out works his man in the opening round of freestyle action.

Winning a wrestling Gold medal in international competition has always been a dream of Guam’s Michael Shinohara after staring at his older brother Ray Shinohara’s previous Micro Games Gold. Michael turned dream into reality after dominating his competition in the 86kg division.

“I have his medal at home and I told myself that one day I would go to the Micro Games myself and represent like he did. Now that I get to bring two medals back home means a lot. It’s going to showcase all the hard work that we’ve put into this. I hope it encourages the youth and promotes wrestling and I hope they want to follow in our footsteps,” said Michael.

Shinohara grabbed a silver medal in the Greco Roman wrestling event held on Monday while giving props to the Pohnpei competitors. Even though Greco Roman isn’t a style Shinohara often competes in, not grabbing the gold medal did leave a sour taste in his mouth.

Dropping less weight played a key factor as Michael felt healthy and on-point with freestyle being his game.

“It definitely fueled me,” said Shinohara on taking silver. “I didn’t come into today aiming to win silver!”