The FD Friars and Tiyan Titans met for the first time since last seasons IIAAG Championship Game with both teams heading into Tuesday undefeated. FD’s offense would prove too much as the home team Friars won in straight sets. 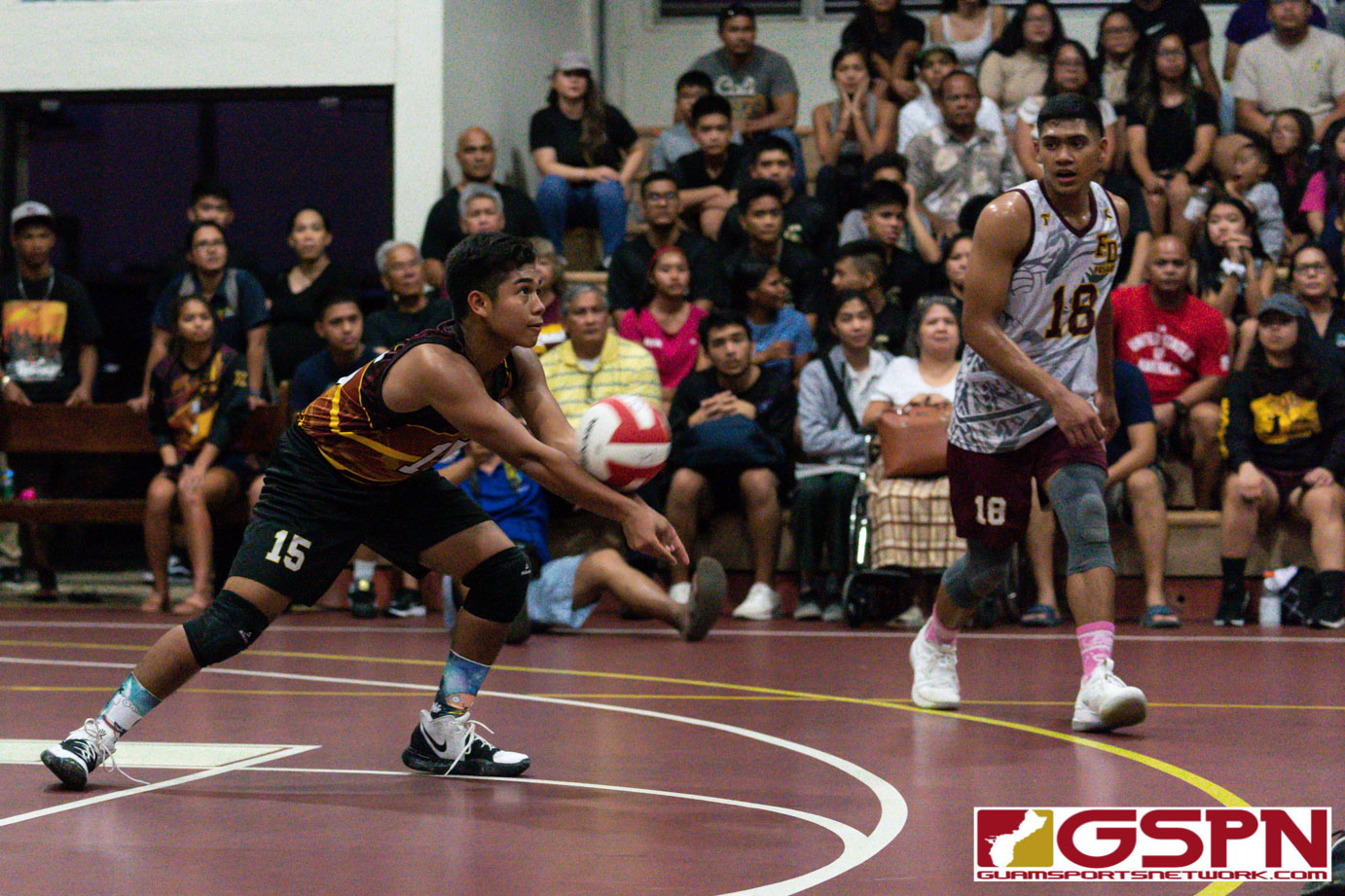 The Tiyan Titans and FD Friars volleyball team last met for all the marbles in last years IIAAG title game which FD won. The hype behind their first meeting since that game was built behind both teams unbeaten 2019 run heading into their Tuesday clash.

Wendy’s Player of the Game: The “Moonwalker” Aiden McDonald finished with 18 kills as FD defeated the Tiyan Titans in straight sets in a battle of the last unbeaten teams in IIAAG high school boys volleyball.(Photo by Michael Blas)

Aidan ‘Moonwalker’ McDonald finished the night with 18 total kills with eight coming off a fired up 1st set.

“They were undefeated, but we wanted to stay undefeated too,” said McDonald on the hot start. “This team works hard in practice and that’s what we display in here. It shows especially when we listen to our coaches, everything runs smooth.”

Friar Logan Pangelinan was feeding his hitters all evening with 32 of their points on the night coming off kills, 28 from Pangelinan’s sets. When FD is performing like they do Tuesday evening they feel unbeatable.

“We feel like we’re the best team on island,” said Jeremiah Nguyen, who finished with seven kills, on when his team is clicking. “We prepped a lot for this game so we really wanted to come out and win this one. We hope that we can perform this way come playoffs.”

McDonald wasted no time getting into his rhythm with four thunderous kills early to get his team up 12-6. Right side hitter Noah Diaz brought in a pair of points on a block up the middle, followed by a sneaky kill for a 19-8 advantage. Aidan tore the roof off the Jungle with a massive slam down the right side with the home up 21-8. McDonald would lock up his eighth kill for FD’s 25th point in the set.

Tiyan responded in the 2nd set with their lead man Neil Ericsson registering two early kills and a block with the visiting team holding a 12-10 lead. McDonald would continue to percolate with a pair of kills to keep the score close as FD still trailed 15-14. Nguyen would cash in his biggest set, locking in back-to-back kills to recapture the lead for good 17-16. Ericsson would keep the Titans in the set with a big block to pull within 21-20, but Brian Anderson and Diaz would further the FD lead ending the set on a Tiyan error.

Now that FD has toppled each of their biggest contenders from last season, the post season and another run at the title is all their concern. That means every team they face will get their best as they don’t plan on overlooking any opponent.

“We’re not going to take any games lightly. We’re going to play each and every game like it’s our last one,” assured McDonald.