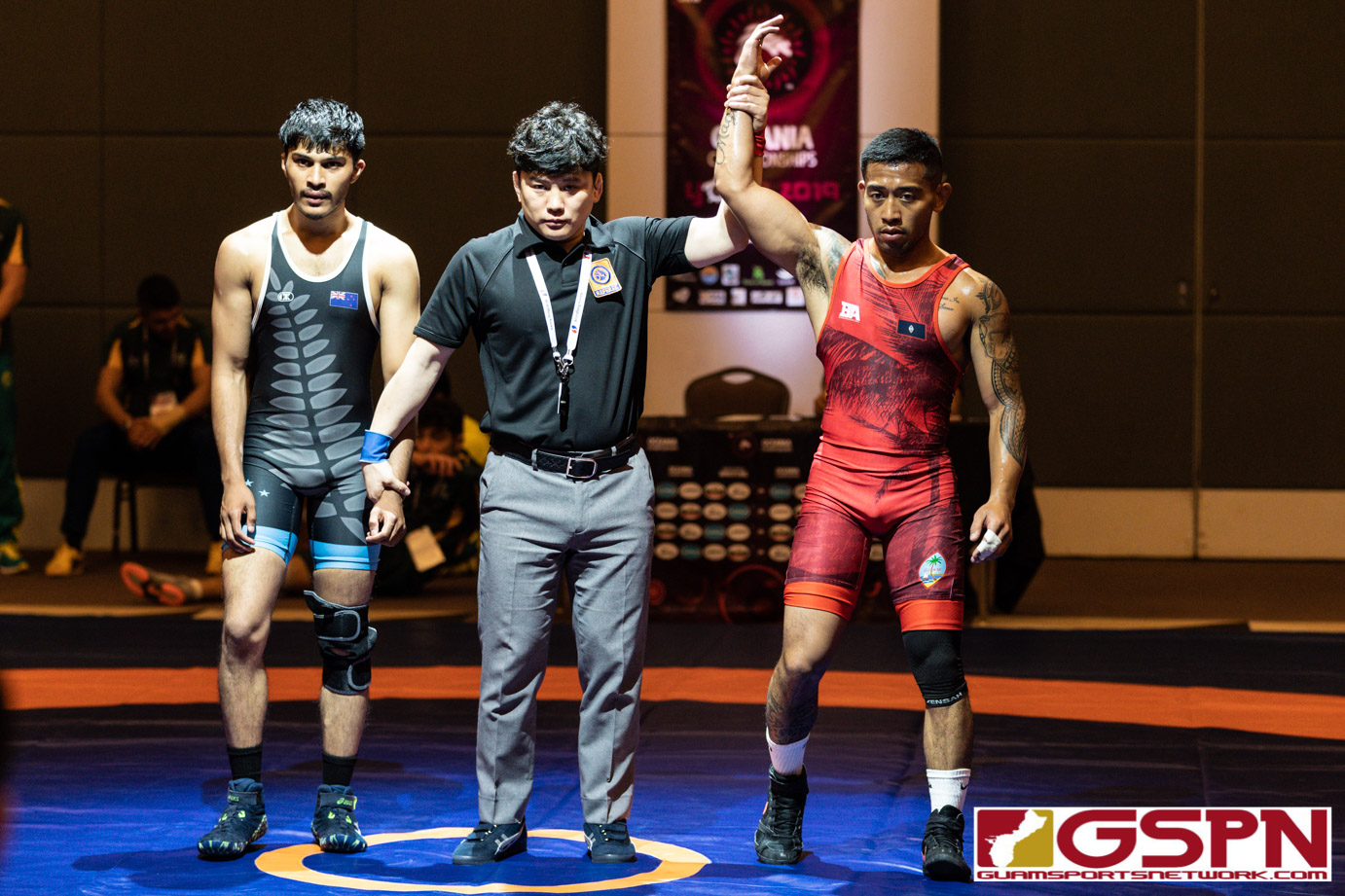 Olympic dreams started over the weekend for the region’s top wrestlers at the Oceania Wrestling Championships hosted at the Leo Palace Resort in Yona. The top wrestlers from the Oceania region competed against each other for the rights to advance to the World Championships in September which will be held in Astana, Kazakhstan. Should a wrestler accomplish a top six finish in Kazakhstan, their participation to the 2020 Tokyo Olympics will likely become a reality.

The event started over this passed weekend, Easter weekend; but none of the athletes had Easter egg hunting on their mind or celebrating with family. Their focus and determination was on the mats at Leo Palace as the Olympic dream continued for some and ended for most. Male and female wrestlers from American Samoa, Australia, the Federated States of Micronesia, the Marshall Islands, Nauru, New Zealand, Palau and French Polynesia travelled to Guam to participate in the tournament.

Team Guam was well represented in the event which featured Greco Roman wrestling on Saturday and Freestyle wrestling on Easter Sunday. Guam’s Ethan Aguigui competed in Freestyle 61KG division and won his weight class to qualify for the World Championships. Aguigui, who came back to Guam for the event, is currently at Virginia Tech and trains with the team.

Aguigui said the World Championships will be his next event and he will compete at 57KG. Others winning gold in the senior division on Sunday were sisters Mia-Lahnee (59KG) and Rckaela Aquino (55KG). Jordan Evangelista (57KG), Lynch Santos (65KG),and Michael Shinohara (86KG) each won gold in the male seniors freestyle division. Winning gold in the cadet division was Gavin Whitt (65KG), Marc Delfin (71KG), and Paulina Duenas.

“As a team, I thought we did well. There’s always room for improvement but the fact that we were able to have a young squad compete and still manage to take first overall in the team race speaks dividends to the amount of progress we’ve made in comparison to years prior,” said Aguigui.

“I had a lot of adrenaline in my first match and got the jitters out,” said Evangelista after defeating Bollung Joklur from the Marshall Islands in his first match.

“I haven’t wrestled against my opponent before but I’ve seen some videos and I know I have to watch out for his shots,” said Evangelista prior to his gold medal match against Josh Failauga from American Samoa. Evangelista stuck to his game plan and came out with the victory over Failauga to win Gold.

Nauru wrestler Lowe Bingham (65KG) hoped his second trip to Guam will be better than the first. “I came here last year and lost to my opponent from Palau. I was matched up again with him (Christian Nicolescu) and this time around I ended up getting the victory,” said Bingham.

Bingham later had to come back against Guam’s Lynch Santos after trailing 6-0 in points early in the match. Bingham managed two takedowns in the second round to win his match by majority decision against the all-island champion.

“The goal is to come here and have a good performance so I can get to Kazakhstan in September,” said Bingham.

Bingham won gold in the division; mission accomplished for the Nauru prospect.

“I hope that this tournament just opens up the younger athlete’s eyes to see just where they stand and take steps they need to get where they want to be. This is a learning opportunity and a stepping stone to strive for more and make the most of such opportunities,” said Aguigui.