ROYALS BACK ON TRACK, DOWN KNIGHTS 5-2

The ND Royals picked up a big win over the St. John’s Knights while welcoming back seven members of their roster who recently competed in Hong Kong. 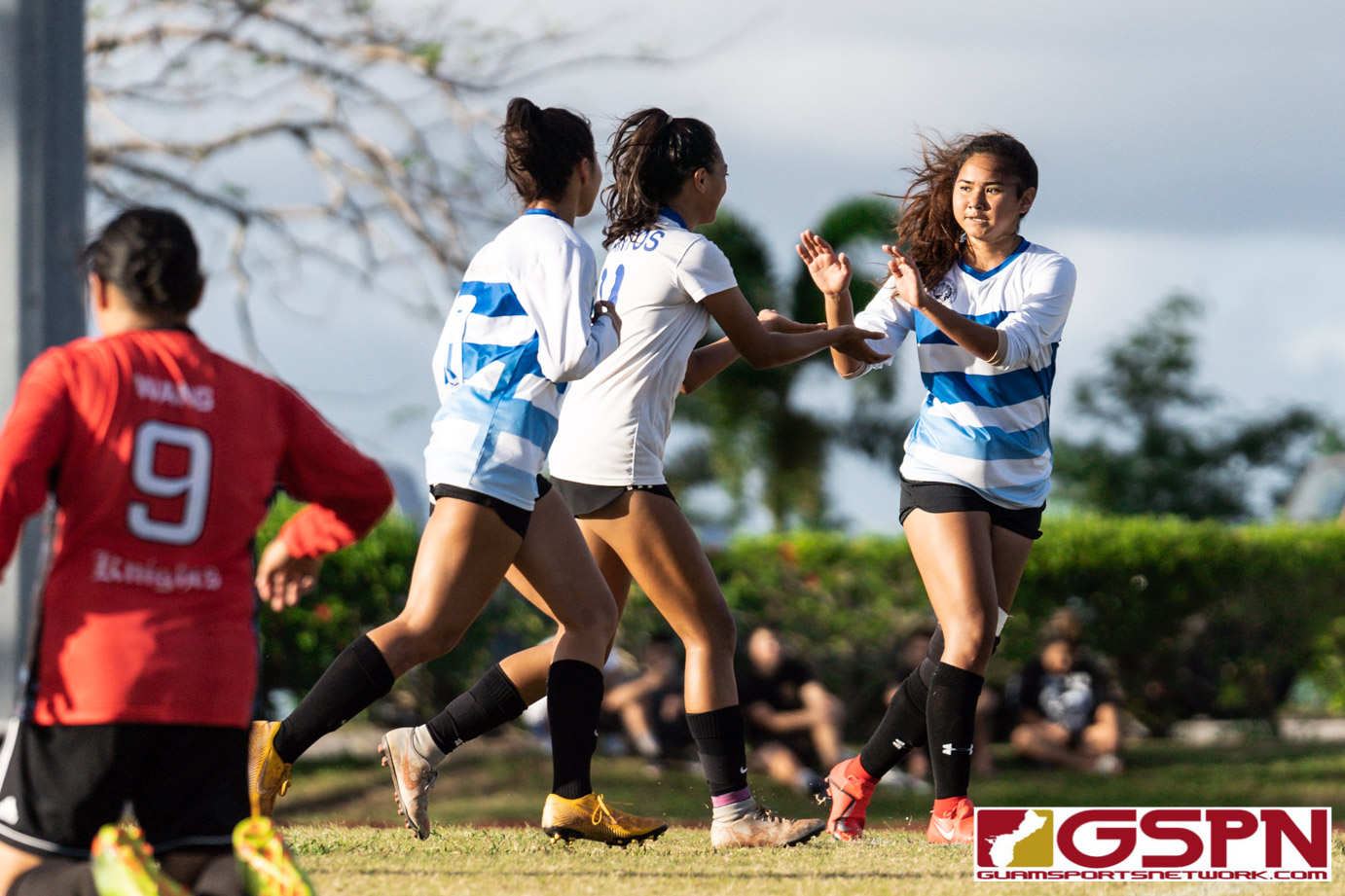 The ND Royals were glad to welcome back a good portion of their roster Wednesday evening against the St. John’s Knights as seven key players rejoined the team after taking part in the U17 tournament in Hong Kong. The girls arrived Tuesday, just in time for a competitive early season clash against a strong Knights team.

Wendy’s Players of the Game: Bri Leon Guerrero scored two goals to gain the lead over the St. John’s Knights and Carli Quinata sealed the win with a go ahead goal. (Photo by Michael Blas)

The return of the U17 girls meant the Royals were running at the full force of their uber talented roster for the first time this season, though it didn’t look like it in the early goings of the opening half at the Leo Palace Field. The defending champs shook off the sluggish start to down the Knights 5-2 to improve to (2-1) on the young season with big goals coming from their leading lady, and last years MVP, Brianne Leon Guerrero.

The Knights made their debut Wednesday against the Royals, the only team that didn’t have any scheduled games in the opening week of the season.

Knight Yasmeen Lopez hit the Royals with a loud wake-up score, netting the games first goal just 27 seconds after the opening tap to begin the game. Striker Lauren Phillips would answer in the 11th minute before Leon Guerrero would give her team a 2-1 lead at the 18th minute to settle down the nervous Royal crowd.

St. John’s knotted up the score as freshman Kaia Malakooti received a through ball from Lopez for the break-away 2-2 equalizer moments later. The Royals would go into the half knotted up and coach Sam San Gil wasn’t pleased.

“I don’t think you want to know exactly what he was saying to us, but we knew what we needed to do in the second half, which was work on our first touch passes. We needed to get the ball around quicker. We are rusty since the girls [from Hong Kong] just came back and we had to get back to playing to our strengths,” said Leon Guerrero.

The Royals came out more determined at the half where they would net three goals to seal the game. Leon Guerrero scored the first goal of the second half after the Knights were hit with a penalty inside the box. Bri went high on the kick getting over the reach of Knights Hana Fernandez for a 3-2 lead at the 45th minute.

Royals striker Carlie Quinata added to the lead on a penalty kick after a header from Leon Guerrero, via a corner kick, was illegally tipped by a Knight for a handball inside the box. Quinata was handling PK’s before she got hurt last season and her teammates had all the confidence that she’d pull through to further their lead.

“It helps that my team had a lot of confidence in me. [Bri] was whispering to me ‘just shoot it in the corner’,” laughed Quinata. “You’ve just gotta trust the process and trust all the work you put in for that moment.”

Quinata shot right and Fernandez just missed it on the dive attempt to put ND up 4-2 at the 55th minute.

The home team added a final goal from Shyann Roberto at the 60th minute as she finally found footing on one of her lethal shots from outside the box to take a commanding 5-2 lead.

ND’s 3-2 opening game loss to the St. Paul Warriors was their first loss in over three seasons. Even with seven of their players missing, the Royals weren’t happy about how they got their 2019 title defense season underway. They dispatched the Tiyan Titans 5-0 over the weekend before picking up Thursday’s 5-2 win over a talented Knights team which has re-shifted their focus.

“We played a lot better against Tiyan than our first game, but we wanted to push the pace today and score goals,” said Bri.