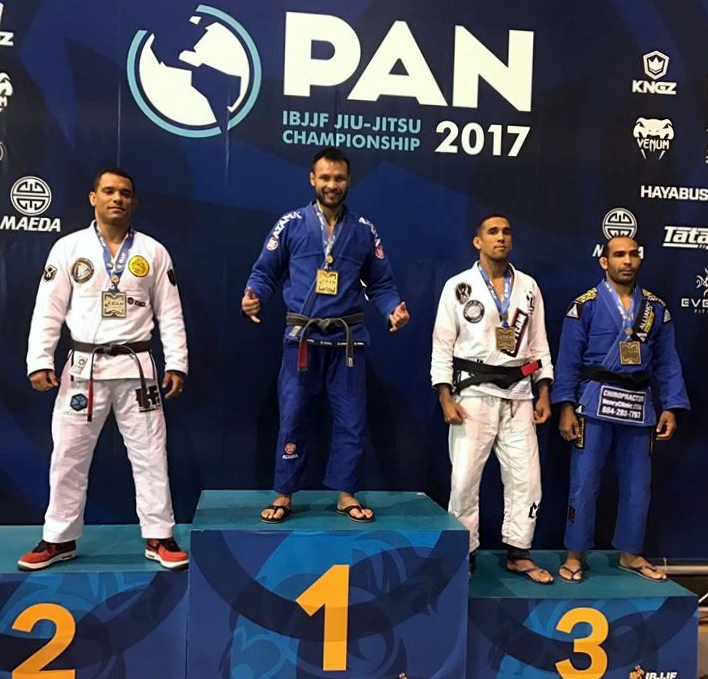 Guam’s Jay Palacios, living out of Lacey, Washington, won the gold medal of the Pan IBJJF Jiu-Jitsu Championships Black Belt Masters 1 lightweight division on Sunday in Carson, CA. It is his first ever gold medal in the Pan Ams.

He was the lone representative of Team Royce Gracie in the division of 26 fighters. Masters 1 division is for 30-35 years old.

Palacios grew up on Guam and attended Ulloa Elementary and Dededo Middle School before graduating from JFK in 2001. He took up jiu-jitsu after high school when he joined the Army. Ten years later, he was awarded his black belt by none other than Guam friend Master Royce Gracie.

“All my credit goes to my family, friends and Master Royce equally,” Palacios told GSPN. “If it wasn’t for any of them I wouldn’t have become the person I am today.”

As for the Pan Ams, Palacios went through four grueling matches before finally beating Igor dos Santos by points (2-0) in the gold medal match.

“The guy was really tough and strong. I had a hard time disrupting his base but once I figured his base I was able to sweep him and put the pressure.”

He defeated his second opponent by kick stand choke.

“I am blessed to represent Guam,” Palacios exclaimed. “Life is full of challenges, it’s up to us as the individual to make a change. We all want what we want, but do not deserve. It’s up until that time to earn what we deserve! I learned that jiu-jitsu is about the quality of the human being. We must earn that.”