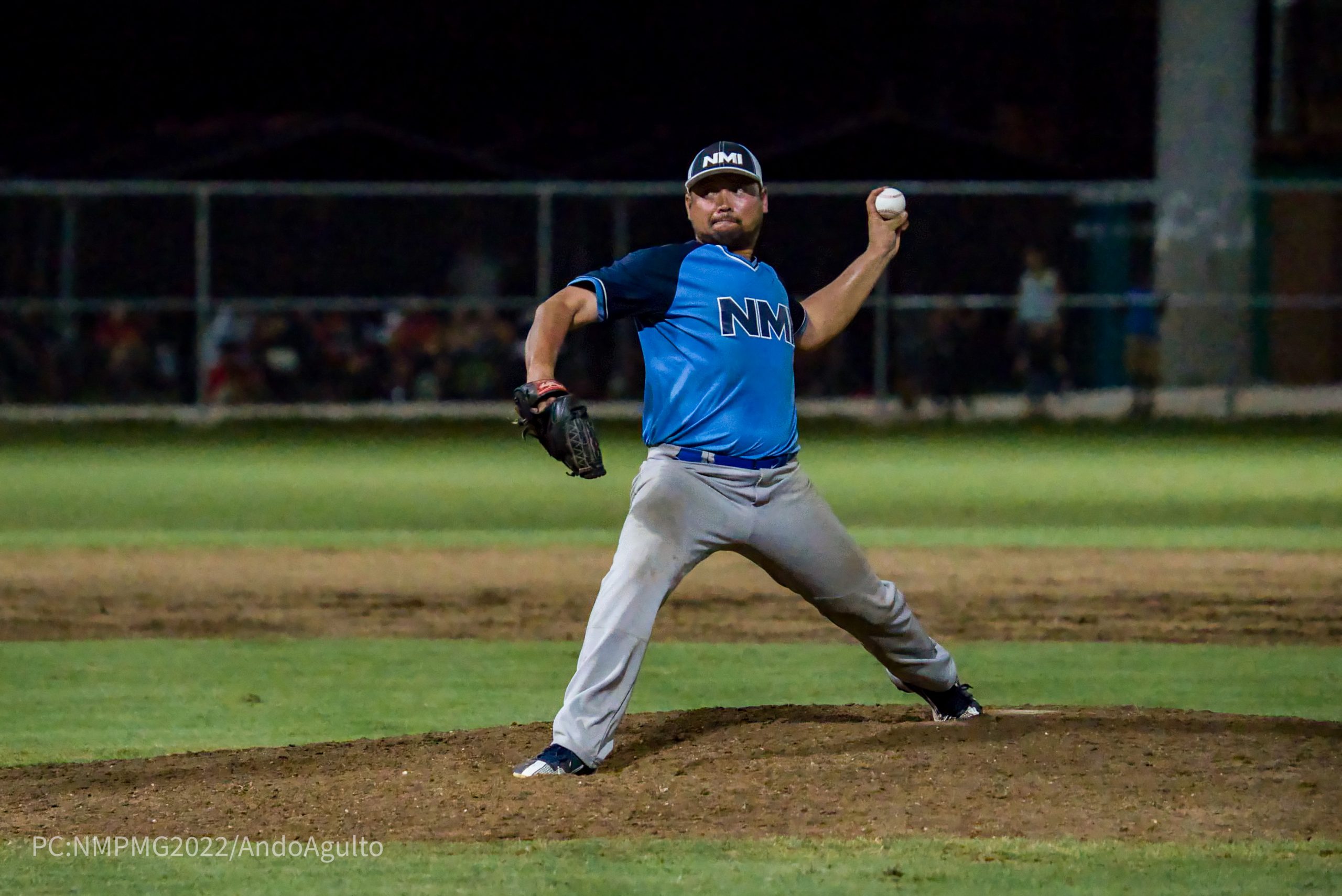 Not even Hollywood can draw up the story of Josh Jones.

From hitting tennis balls with tangantangan sticks to clinching gold medals against the best in the Pacific, no movie script could have created such a fairytale baseball story.

Josh Jones is a living legend after what he pulled off on Friday, June 24, 2022 in the Pacific Mini Games in front of his home crowd.

Not only did Jones pitch a complete game, two-hit shutout with 17 strikeouts in 127 pitches against Palau in the afternoon to advance to the gold medal game against Guam, he came in relief in the championship game later that evening for another 103 pitches in six innings of work to capture the gold medal at the Tan Ko’ Palacios Ball Field in Saipan.

“Baseball has been the number one sport here and it’s an honor to represent not only Saipan but the whole NMI. They call it ‘the unthinkable’ that one day, but it also makes me humble.”

Guam took a 4-0 lead in the championship game before CNMI tied it up and Jones took over in the fourth inning with CNMI eventually taking the gold 12-9. It was a full day on the mound pitching 15 innings, striking out 26 batters in 230 pitches.

Such a performance deserves instant placement in the Saipan history books and an immediate construction of a Josh Jones statue in his village of Achugao.

What adds to the amazement is that Jones pulled off this feat in almost the exact same fashion in the 2011 Pacific Games in New Caledonia. As an 18-year-old, he pitched a complete game against New Caledonia to make it to the gold medal game against Guam where he came in relief after Guam took a 4-0 lead. CNMI ended up winning the gold 8-4.

“Greatest Pacific Games pitcher to date…100% pure winner,” said Guam manager Joe Tuquero, who was a player on Team Guam in the 2011 competition.

What most don’t see is the preparation, hard work and pure baseball intelligence that goes into this type of unthinkable performance.

Jones remembers watching his older cousins playing in his back yard in Achugao, a northern village of Saipan. They would ‘borrow’ tennis balls from a nearby tennis court to toss around as baseballs and cut up tangantangan to use as bats.

He started playing Little League when he was 10-years-old and loved the sport ever since. The lefty knew he had a gift for pitching at age 12 when he already had command of his fastball and curveball.

His first taste of international competition was at the 2010 Micronesian Games in Palau where the high school pitcher was part of the CNMI silver medal team, losing to Palau in the finals.

The very next year is when the legend of Josh Jones began in the 2011 Pacific Games in New Caledonia when he pulled off that remarkable performance to lead CNMI to gold.

After Pacific Games gold, Jones went straight to play college ball at Colby Community College in Kansas. There, he was teammates and roommates with Guam player R.J. Joe.

In 2014, it was Guam vs. CNMI once again in the Pohnpei Micronesian Games. This time Guam took the gold as Jones was rarely used on the mound and didn’t pitch at all in the gold medal game.

“The coach probably didn’t want to overuse me because I was transferring to a four-year university,” Jones remembers.

That college was West Alabama University where Jones went 12-1 in two seasons and earned a bachelor’s degree in Exercise Science with an undergrad in Criminal Justice.

“The competition was really high. I was so happy going there because I could see where I stand with my skill set as a pitcher. I did pretty good, surprisingly.”

After graduation, Jones had a short stint in California before moving to Arizona in 2019 to take on a job with a Caterpillar dealership as a parts inventory specialist.

From 2016 to October 2021, Jones played strictly softball, but he knew his island would be calling to prepare for the Mini Games on his home turf.

“I knew I was going to get a call since we were hosting so I started getting into my baseball training. The one-year countdown in June 2021 to November, I was getting back into baseball shape since it was six years (since playing).”

He played in Arizona’s National Adult Baseball Association where “Competition was solid. I knew where I stood. I worked on my mindset, what pitch sequence to execute…mentally back to my college days.”

Upon arriving back in Saipan in April, Jones started training with the CNMI boys right away, giving them tips he’d learn in the states from drills, hitting, stretching, pre- and post-game details. He even helped his coaches with in-depth thinking on game situations.

The PMG organizers featured the Guam/CNMI rivalry as the main event of opening night in Saipan. The best of CNMI against the Guam Junior Nationals (with a few veterans), who were coming into the Games in first place of the Guam Major League at that time at 9-1.

“My mindset was to test these young kids with my fastball to see how they react to it,” Jones said about his first look at the young Guam lineup. “Knowing that they couldn’t catch my fastball, that built my confidence level and helped me pick my spots.”

“After the first inning, all fastballs. Once they hit my fastball, I’ll change it up, but they couldn’t hit my fastball so I didn’t need to change. I’ll just challenge them. My IQ for pitching is really high. I can see things by their stance.”

It was his first live game performance since 2014, saying “It was a great feeling like I never stepped away.”

“That game against Palau when we got blown out, that shouldn’t have happened. I was kind of upset finding out that we were #3. It felt like New Caledonia all over again. I was going to have to throw a lot of pitches. I had to get my mind right again when I threw a lot in New Caledonia.”

Guam would later beat Palau two nights in a row to earn a spot in the gold medal game.

CNMI had to beat Palau at 1 pm to advance to the gold medal game later that Friday night at 6:45 pm.

With a do-or-die situation, CNMI had no other choice but to go with Jones against Palau.

“I was ready for Palau. Same game plan. Towards the end, they were shortening up their swing, so I threw more breaking balls. They were expecting outside fastball, so I would throw my curve after a one-strike fastball. I felt better that game than the first Guam game.”

The dominating complete game stat line should’ve been more than enough for any team or pitcher, but the thought of Jones pitching in the gold medal game was always a viable option.

“I was still loose and ready to go,” Jones said about his feelings in between games. “I didn’t have a heavy meal. I was just rolling my body with the foam roller and eating a lot of salt and fruits. Just get my body moving and make sure I don’t cramp. I felt good. My arm still felt good.”

Against Guam in the finals, CNMI went with veteran Franco Nakamura on the mound who fell behind 4-0 in three innings of work. In between those innings, Jones was staying loose by tossing with right fielder Tony Tenorio.

“I was going to come in no matter what.”

CNMI tied the game at 4-4 before Jones stepped in relief.

“I sprinted out to the mound. I felt really good and was ready to go to the end. I sprinted out every inning to get the blood pumped up. I knew which young hitters gave me a hard time from the first game. The game plan was my fastball and I just studied their hands. They were expecting first-pitch fastball. They were fouling it off so I started throwing more breaking balls.

“As I kept going, I was throwing harder. And my curveball was really working, because in the Palau game, it wasn’t that sharp. But baseball is either an offensive game, or a pitching duel or defensive game. For some reason, no matter how good the pitcher is, in an offensive game, if we score, the other team will score. It was just one of those games. After a couple of innings, my legs were giving out, but my mind controlled how my mechanics were going. By the 6th inning, they were adjusting to my pitches and getting the ball in play.”

It was evident in the Guam dugout as well. “Josh was throwing with all heart and was exhausted and still prevailed along with the great hitting of his team,” said Guam’s Tuquero.

After getting the first two outs via strikeout in the bottom of the ninth, Jones got Jaythan Muna-Barnes to hit into a championship-ending groundout to third.

“It would’ve been nice with a strikeout. I didn’t get the strikeout so I don’t know where’s the game ball. Maybe some kids took it.”

As the CNMI took its celebratory victory lap around the outfield with their flag in hand, Jones made sure he captured his historic performance through video.

“I had to go back and get my phone to make sure I took the video of the championship lap.”

The young national team proved they can perform on the big stage, most noticeably Guaifon Terlaje and Javen Pangelinan. Jones even noticed the skill level of Guam’s youth.

“They were nervous,” manager Tuquero said about his young team facing Jones. “They only have heard of him through me and a couple of the older vets. They are in awe of him but always want to face pitchers like him. They appreciate his high quality pitching and fierce heart and although we lost, we all are super proud of him.”

At 29-years-old, Jones is far from done and feels he’s just now getting into his prime years. He’ll be heading back to Arizona and plans to be playing both baseball and softball to stay ready for future CNMI competition.

“I throw harder now….I still feel vintage, just a little more weight. I was throwing really hard these games. I’m going to keep playing, keep pitching and see how far I can keep doing this. I have a lot left in me. It’s crazy.”

Before he heads out though, Jones plans to give back to the youth of Saipan by hosting a couple of baseball clinics.

“They knew what I came to do and now I have to give back before I leave.”

And that is what legends are made of.