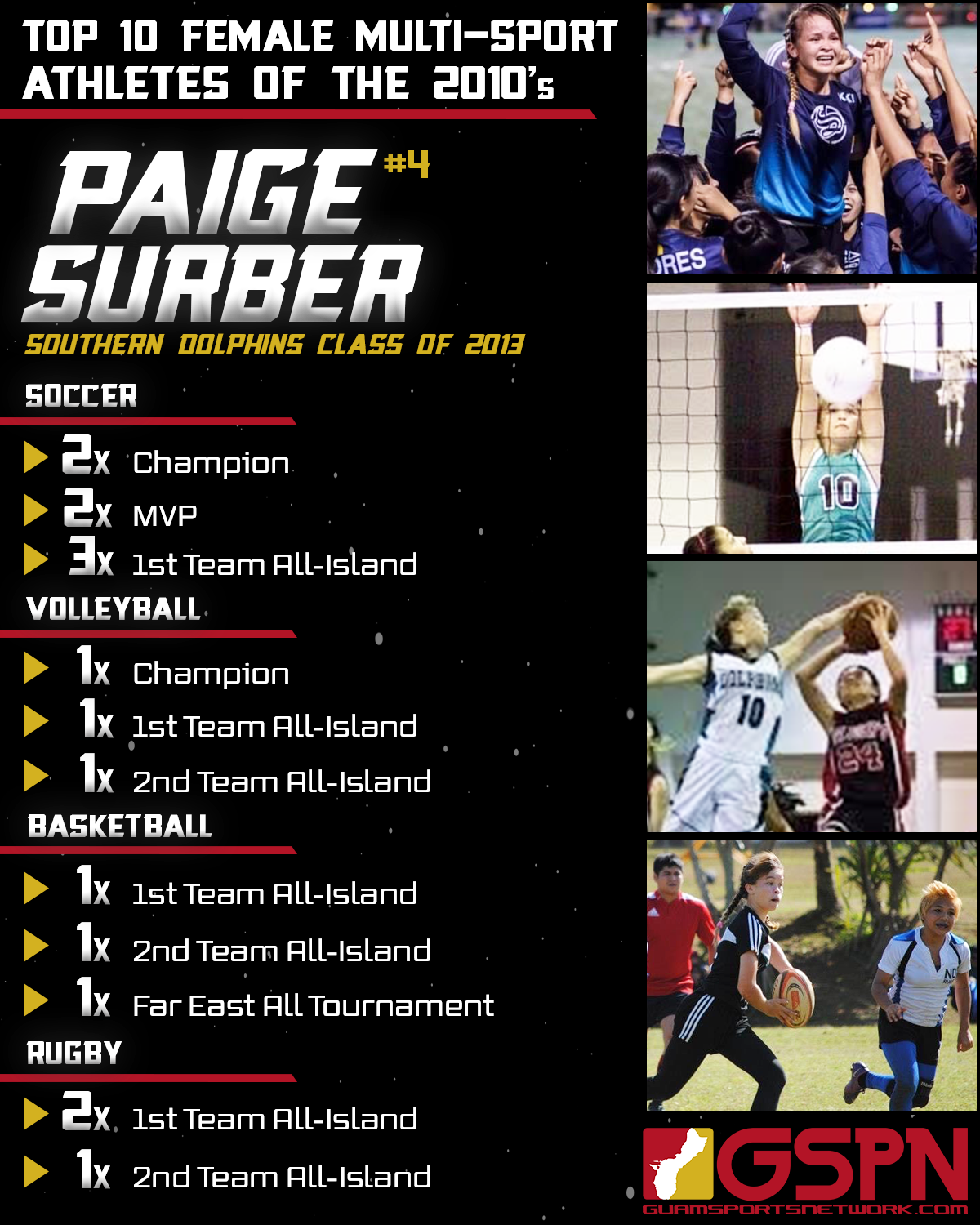 We continue the countdown with girls #4 Paige Surber of the 2013 Southern Dolphins.

A generational talent with leadership skills that could inspire any generation, Paige Surber often led by example. Paige is the voice of any team she is a part of and her no-nonsense approach has not only brought the best out of her, but often her teammates as well.

Paige was the ‘Queen of the soccer field’ her junior and senior seasons winning back-to-back titles as well as back-to-back MVP honors. Her performance in the 2013 title game was memorable and emotional with a goal and assist to seal the teams repeat. She suited up for the Mini Masakada since the age of 15 and has been playing with the women’s team since.

Surber’s senior season was also highlighted by a volleyball title, working as one of the leagues best hitters as she took center stage in the title game against the GW Geckos.

Paige even stood out in International play earning a spot on the All-Tournament Basketball team in 2012 with her team getting as high as a 3rd place finish her senior year.

Paige would eventually work her way up the rugby ranks getting honorable mention her freshman year to a two time 1st team selection her junior and senior seasons.

After high school, Paige continued to live an active lifestyle playing women’s tackle football, where she’d win three straight titles with Team Legacy along with a Rookie of the Year honors. She can be found coaching up Southern from soccer to rugby while also spending time with the Women’s National Rugby team, so Surber’s sports story is still being written!

“This is such an honor for me honestly. It just shows that hard work, sacrificing  and dedication will always pay off. All the hours, blood sweat and tears, putting in work during practices and then finally show casing your talent through game day or even being called up to represent Guåhan is a humbling honor or feeling. It makes me feel honored to be on the list and reminds me that as long as you work hard for something you love and feel passionate about, it’ll never go unrecognized

It’s been an amazing flashback to see my journey since I was old enough to pick up a soccer ball, a rugby ball, a volleyball, a basketball and a football. Being a multi sport athlete is ridiculously crazy, cause not many people can have the privilege of saying I did that or I worked hard to be at the top for people to finally recognize the athlete I worked my ass off to become. Not many people know that being a multi sport athlete comes with responsibilities and sacrificing your time with family, friends and other hobbies you want to squeeze into your schedule, but then you really how busy you are with multiple practices either it’s school leagues or outside league and my career of being a multi sport athlete consisted of both. Being an athlete in general I learned that you got to be all in, you can’t half-ass anything or you get half as results, you have to work hard for what you want, turn your weaknesses into strengths, and always remain humble in everything you do.

I  just want to thank my mom, my family, my friends, my coaches, Southern Cobras, My Southern Top Team Familia and my teammates, but especially to God for blessing me with the opportunities that sports has given me, blessing me with athletic abilities to do the play the sports I love and for opening doors for my future. Always blessed for all my achievements throughout my sports career and I thank god everyday for keeping me health. Also for getting me through the hard days while I was sick, and allowing me to grow as an athlete and a person, but for also teaching me to come out stronger than I was before. I’m thankful for the friendships I built along the way, for the amazing coaches I had the pleasure of being coached under and for the fans that always supported me throughout my entire journey. God bless everyone and the athletes to come. “