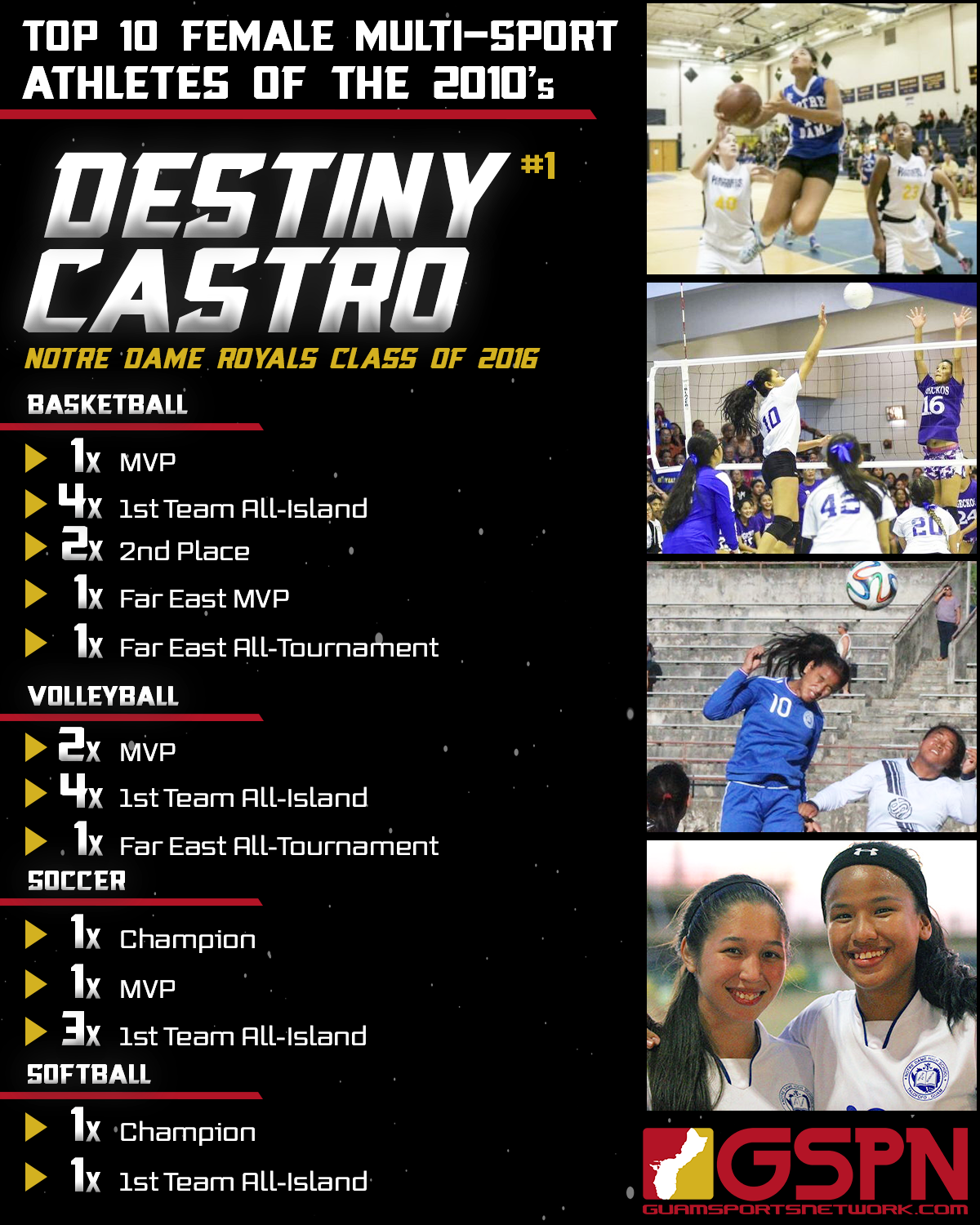 We’ve reached the top! Today we reveal #1 Destiny Castro of the 2016 ND Royals.

The inspiration behind compiling this list of particular multi-sport athletes was Destiny ‘Queen B’ Castro. Destiny is widely recognized by her basketball accolades and accomplishments through the years, but the inspiration behind this list came from speaking with her coaches from the other sports she played.

Destiny had built up quite the hype during her youth basketball days and she didn’t disappoint when she cam into the high school scene. As a freshman for the St. John’s Knights, she and Kali Benavente would help their team reach the finals in a loss to ND. She would transfer to ND for the rest of her high school career, capturing an MVP title and finishing as high as 2nd place her senior season.

There was a regular season game the Royals had won 49-43. Castro had scored 42 of those points in the win, nearly outscoring the opposing team by herself.

Take her talents to soccer and Destiny was instantly one of the leagues best strikers. She would capture a league MVP and finally captured the elusive title her senior season while leading her team in scoring each season when healthy. In the title-winning game, Castro would capture MVP of the match.

Castro was an immediate impact volleyball player and evolved into the teams best hitter as a Royal. From her versatility to being able to put balls away better than anyone in the league, it was only a matter of time before she would be named league MVP in 2015. A title would elude her in volleyball after finishing as high as 2nd place. In off-island competition, Castro was also amongst the few Guam members to be selected to the All-Tournament team in Far East.

Castro’s lone season in softball for the Southern Dolphins was a memorable one, winning her first league title. She instantly became one of the leagues best hitters by getting a 1st team selection.

Castro would go on to play basketball at Chaminade, becoming the school’s all-time leading scorer midway through her senior season. The real question is where would Destiny land on an All-Time list? She just might be the best multi-talented female athlete we’ve ever seen.

Destiny’s reaction to being selected

“When I first saw [the] message, I was shocked and extremely grateful to be chosen for such a great honor. Out of all the amazing athletes on the island, it must’ve been tough for you all to decide on only 10 throughout the past decade, and I thank you for using one of those spots on me.”